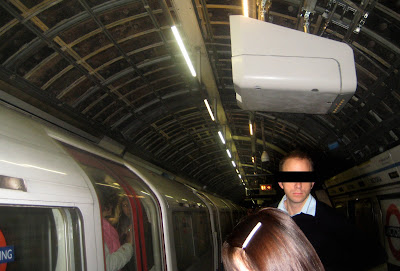 It's been springing up all over London's tube/subway network; projectors showing images as commuters await the next tube.

I looked up at it and managed a smile before swiftly firing off this pic.

Back in 2001 my colleagues and I were approached by Viacom UK .

They had a wonderful project and had seen our work and would we be interested as part of the pitch for an innovatory approach to advertising on the underground.

Re-active.net, based in the heart of Soho was managed by former Saatchi and Saatchi Head of TV Jon Staton, with Rosalind Miller, a brilliant designer, now lecturing at St Martins and me mixing my prod/dir/cam skills; video journalism into something more aesthetic.

Our office was shared with the ad copyright duo who were responsible for such advertising gems as: The car in front is a Toyota, and Audi 'Vorsprung Durch Technik' .

It really was something to see how everyone brain storm around the room leading up to the shoots.

Working with Viacom we devised 5 degrees of motion, which would: 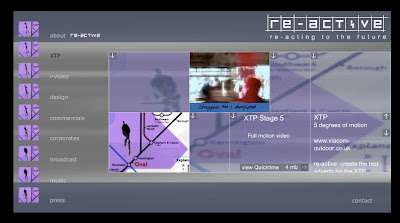 You can see the fifth version here, ( 5th degree of movement) which I produced/directed and shot, with Jon Staton, former head of TV at Saatchi and Saatchi executive producing.

Whilst the stills and animated version can be found here. by clicking XTP.

Rosalind Miller, creative director at re-active, oversaw the Flash and After Effects work.

We had a week or so to out together five adverts, which were eventually part of the big pitch.

I'll come back to this when I locate the brochures and DVD.

Funny how relevant all the playing around in early days of DVCam/ video Journalism has become.
Posted by Dr David Dunkley Gyimah at 3:27 pm