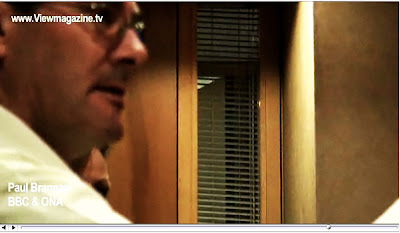 Blogging live: Paul speaking for about 30 mins.
You can see a short video of Paul at London's Online News Association, when we gathered to hear reuters talk about mob phones
Paul Brannan,editor of BBC Emerging Platforms is talking at the Uni about reinventing the future.
A precise follows as he highlights changes in the industry.
Paul talks about " 13,000 job lost in US - Source Garret co Inc.
Penetration of newspapers down, 2007 steepest decline in a while.
At home UK losses in ITV and Channel 4".
Inventing the future through the past
He later goes on to speak about Paul Chappe ho invented the pre-telegraph 1791.
"If you succeed you will soon bask in Glory", he notes in his presentation.
Chappe's invention was picked up by Napoleon who helped push it along.
But being first does not guarantee success, he adds. Chappe did not benefit from his invention.
Brannan takes a stab of the future and shows a picture of a mobile from the 70s and more recently the 90s explaining how technology has changed.
Nokia calls it the age of the 4th screen, ff on from Cinema
Some stats he reel of from the BBC and those getting content 47 percent users survey used mobile. 50 + percent said they used it to surf the web.
Uses DVDH signal ie the phones, but the problems receiving signal.
Slide of Hellen Boaden, director of BBC News shown talks about 2m gone because of the nature of news. It says fewer that 24 percent of 15-24 watch 15 consecutive minutes of BBC News on TV in any given week.
Paul explains how mobile picked up last images of Saddam Husein
Paul then segues into UGC and talks about how the power now lies with the audience.
References Nokia 95 phone then points to Kyte which runs UGC, then Qik -allows streaming to sites, and then there's www.flixwagon.com and 12 seconds.
Disparate content from RSS readers such as netvibes, Paul adds is his mode of surfing online. If the news headline doesn't work he's off.
Zoopy contacts with friends, synchronous data, to give context. Trusted places site ensures you give credible info otherwise your rep suffers.
Here's Paul's advice to about 140 students gathered in the conference room
Q an A
Paul goes on to explain the sort of person he'd employ if he were in an interview.
Quesions ff on Trust
Paul explains Trust is everything.. defending the BBC

Question of those who took pics at Bunsfield fire. Were the people there irresponsible?
Paul points to strict guidelines that the BBC uses to guide those who submit UGC

Question on hyperlocal TV
Paul says BBC not doing hyperlocal, however imminent decision due soon on this matter. See my previous posts
Posted by Dr David Dunkley Gyimah at 5:12 pm