Some times an idea is ahead of its time, sometimes they've got to come around again.

The report above looks to the future of metaverse journalism - taking in a number of areas via video journalism.

But then it's inspired something more cine-based which I'm working on.

But how to get it out? I could use the web etc? but what else?

Couple of years back the digital card made its presence and as an idea before its time caused some amusement.

But now its back in vogue and the file capacity has gone from a dinky 25mb to 100mb and more. 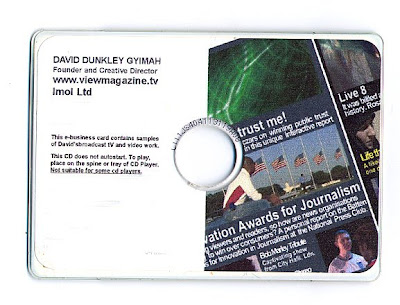 Digital card for carrying anything from a full movies to film pitches
So you can carry the trailer, the web site, the film pitch, what ever on that business card.

If business cards are meant to ac as visual prods to elicit contact, then this digital card, the size of a credit card goes one step further. 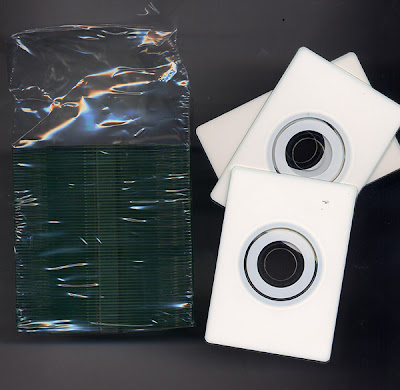 The trailer should be ready before the international video journalism awards, which I hope to preview here.

p.s Added belatedly from David ( sitbonzo) comment. DO NOT try putting these into Macs or PCs without a tray otherwise its curtains. The cd needs to be placed on a tray. Thanks David
Posted by Dr David Dunkley Gyimah at 8:52 pm

Awesome idea mate - have any leads on where to find these here in the states???