The Future of VideoJournalism is part of a three post article looking at the conventions of videojournalism. You can read the most recent here and the first post here.

"You might call me a doc producer, and you might be right. You might say I make news features and I might consider this. You might say the pieces I made look like motion graphic packages and I might not disagree. And then you might say actually what do you make? ...
And I might reply all of the above and none so specifically. No one owns video journalism. It can neither be prescriptive nor easily defined. It is what is is to those that practise it".

Neither exclusively reportage nor videography, Video journalism occupies a rare and evolving genus. So much so that it's found itself at the centre of a tug of pedagogical and industry war.

At stake is the notion of dictating a prescribed set of rules, attract a following and have commerce do the rest.

If you disagree with the body politiks of any of its major communities, then you risk ridicule.

There's nothing new there. Thomas Kuhn captured our propensity for protectionism and a move away from fixed discourses in his pronouncements: The Structure of Scientific Revolutions.

The seeds lay in the past, even a more immediate one. Or as John McHale, a cyberneticists explaining American Culture would say: 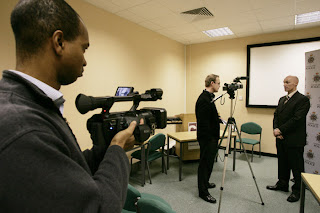 Video Journalism is not TV.

There were reasons the regional journalists wanted it so; distinction, difference, a fresh outlook.

Mine emerged from the 18 years or so in the media, many of which involved working either as a journalist, producer, reporter and in some cases video journalists for some of the most respected networks around.

What I had experienced and seen what Video Journalism could do was different, not always necessarily better than TV , but different, tailor made for this new web platform.

The wondrous nature of video journalism's origins give some idea. TV its most obvious cousin emerged from the silent movie reel with a lot of help from radio.

In fact the first coterie of TV reporters e.g. Cronkite (US) Dimblebee (UK) almost exclusively came from Radio, and before that print. They were the finest of their time.

The classical nature of TV news mirrored in many respects Hollywood's formulae for story structure and resolution. But whilst different genre conventions began to evolve in film e.g. avante garde and documentary, TV News maintained its set of codes, though different house styles emerged for different corporate authors.

For example ITN reports differently to BBC; ABC will have its house style as will CBS. If anything the form that creatively mashes up TV with a sub genre e.g. 1st person narrative versus omniscient is documentary.

Video Journalism has thus gestated from TV, where as a broader, richer canvas would be a hybrid of cine/photographic language and radio/TV reportage, which a growing number of VJs are reveling in.
Scott Rensberger, [right. pic] one of the US's most celebrated multiple award winning video Journalists talks to David.

The latter sets up an interesting proposition. In order to critique film/video we need to comprehend some of its language and distinguish our analyses from the audiences' expectations.

The former of these resides in what might be referred to as an evaluative assessment. Who's the audience? Did it satisfy their needs? Were the graphics good? Did it meet what often is a reference to classical story arc?

These are instincts often you build up and again depending on the target audience will differ from one group to another.

An interpretive analysis of film presents huge problems and is the stuff of critics, whom themselves may differ in opinion, but they often have one thing in common: a rich historical understanding of the product.

Video Journalism's Achilles
Why is this problematical now?

Because whilst you wouldn't ask someone who's had a limited knowledge of newspaper design to present to the board a critique and launch of a new newspaper, it has parallels in an interpretive analysis of video, if your knowledge of video is limited.

This is by no means qualifies only those with the scars of a camera to talk meaningfully about video journalism. I personally wouldn't dare profess to knowing it inside out. I am a student of its form with a particular perspective.

Whilst conversely not having looked down the lens doesn't disqualify those new to the genre. You don't need to have been a video journalist to understand any of the forms of the video journalism.

But it does mean when we critic its form it would be expedient to have a broader understanding of analysis deployed. Story form, a play with the form, comparative analysis, technical innovations, tone and delivery - just some of the things that matter I would say in Video Journalism's increasing diversity.

This last statement sets up a segue for point of this post: "the many forms of video journalism".

The future of video journalism is and will be a break into different forms, as witnessed at the 2006 Video Journalism Awards in which you could distinguish between genres like: breaking story, video feature, independent, self reflexive and so on.

Unlike the media of television which delineates its product linearly, notwithstanding styles such as Flash backs and Flash Forwards, the web is spatial, and so we might well see a style emerge that captures spatial story telling. In 91 Manovich gave us a reason to see this with THE FAMILY at 56k modem speeds. 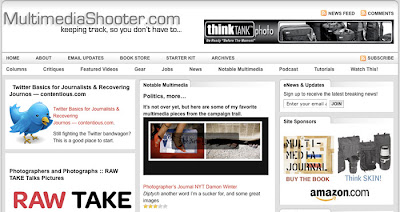 For more contemporary and innovatory forms I strongly advise to look at Richard's Multimedia Shooter.

That void is being touched with multimedia, but we still can't be sure of the shape of things to come. When video hyperlinking breaks, what next?


What we can hope for at the moment with this nascent form is a healthy debate and discourse.

No one owns the form.

At the moment it is without form [ unless you prescribe to its TV tendencies], we have the ability to create a new visual stanza that just as TV borrowed from its antecedents, it takes and moves on to boldly......[ you're ahead of me :)].... gone before.

One which takes into account narrative and exposition, montage and sequencing [ spatial as well] and the new technologies that are likely to come on stream.
++
+++

David has been nomintaed as a 2009 wemedia finalist game changer for creating Integrated Multimedia Video Journalism, as a viable training course. To vote for him, please go to wemedia
++
David Dunkley Gyimah is researching the Outernet for his Phd, integrated multimedia video journalism and is researching with a colleague a Video Journalism doc, a remaking of Darwin's cell theory.

For more on David's ideas around videojournalism go to www.viewmagazine.tv, in which he's about to add some fresh material.
Posted by Dr David Dunkley Gyimah at 10:48 am