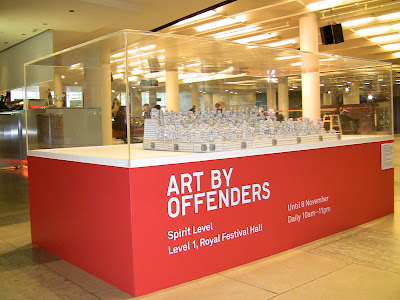 Miniature models painstakingly depicting an orchestra made out of music manuscripts

Extraordinary, but for reasons many assume offenders and convicts are not creative.

That at least was the reception I got when I made a film on this in the 90s.

I can't show this film because the inmates serving life sentences at the time may by now be out of prison and I did not have them sign any release forms. News rarely does.

And the Net was barely crowning. 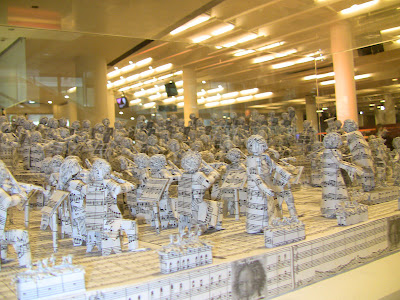 But at the South Bank is an exhibition to inmate art, featuring a range of extraordinary pieces.

I asked if I could take photographs and the security warden said it was OK.

I merrily set about taking pictures down stairs only to be told by a curator I couldn't.

However it did occur to me that as a policy, someone higher up in the organisation that's behind this should allow for photographs, [ attributing the artists] if that is they want to you to see it or encourage you to go.

p.s the pics were taken with the Cannon HD CMOS
Posted by Dr David Dunkley Gyimah at 1:05 pm