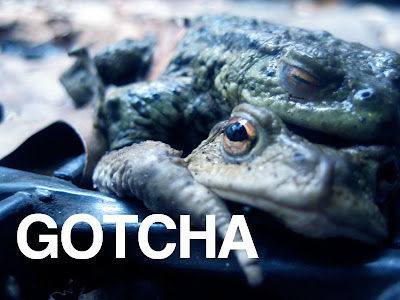 It's come to be known as Gotcha Journalism, a supposedly emerging dark art which Palin supporters are expressing fear over; dirty tactics from the press.

I'd call it pap, (paparazzi) tabloid and in many cases plain forensic interviewing.

Perhaps the coziness between the executive and the press has become too chummy. " Hi bob, Hi Sarah". Be careful what you say otherwise we'll revoke your white house press corp privileges.

For Gotcha in many ways reveals a flaw in not being able to ask those obvious and necessary questions.

Gotcha is about pulling those skeletons from the wardrobe. Gotcha is having a go, which as a journalist you're supposed to do.

May be the people that bemoan Gotchaims have never been "Snowed", "Humphried" or "Paxed", three of the UK's most formidable interviewers who put the fear of a studio in just about any politician.

Today's late Brian Redhead had a few gotchas; his the more solemn type; stealth and grace, you never saw it coming.

And I might add I believe I have watched a few (Ed) Bradley interviews that were classic Gotchas.

For Britons, Gotcha, sounds all too familiar. Noel Edmonds setting someone up for the pranks of pranks, but that's light entertainment.

In the arena of political interviews there was Margaret Thatcher , Gotached from a housewife, Diana Gould, asking why the Prime Minster sanctioned firing on the Belgrano during the Falklands Conflict.

Gould added the Argentinian vessel was heading away.

Thatcher's husband Dennis later berated the show's producers mad that his wife has been"stitched up by bloody BBC poofs and Trots.

Thatcher's Defence ministerJohn Nott was famously Gotched by Sir Robin Day when he was accused of being a ‘Here Today, Gone Tomorrow’ politician live on TV.

He got so mad he pulled of his mic and marched out.

Gotchas make for good TV, but there is one major achilles at hand.

Gotcha journalism, more Getcha life, one that stands up to scrutiny.