They've done it - the paperless newspaper - a breaking story, literally. Future of newspapers 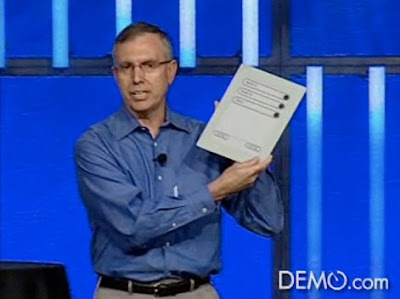 The BBC's national news talk programme, Today reports a Cambridge based tech company has cracked the e-newspaper, an innovatory newspaper made out of plastic heralding the future of newspapers.

The company Plastic Logic [video here] mooted the idea a while back and has de facto been in competition with the Tablet reported on viewmagazine.tv here.

On our flight back to the UK we spoke some more. One of the issues, Simon said, was finding an affordable cost- effective price for producing the device, with the Far East being considered.

Plastic Logic's CEO Richard Archuleta announces on this video that the first commercial factory is running in Dresden, Germany.

So what effect will the e-newspaper have on the industry?
Pros for e-newspapers
That's the talk that will now split the industry, but there's no denying its benefits:
However to corrupt a well known phrase: "I love the smell of newspapers in the morning. it smells like...victory".

The epaper will certainly grab headlines and lead to more end-of-days talk for newspapers.

It may well spawn a new industry of jobs, e.g. designing for a mobile screen in tabloid form and put pressure on existing ones.

To start off business's will simply take their existing product to the screens before behaviourists determine more suitable compositional layouts. Note, the trend of newspaper publishing to the web.

And what about its reception from consumers?

Perhaps at least for the mean time - it's a generation thing- the two will co-habit. Just as the Net and video is doing so with TV.

Philip Meyer's google stakes are about to go drive up again.
Posted by Dr David Dunkley Gyimah at 7:59 am

Bravo!
I love the idea of being able to walk into a tube station in the morning and download a paper before I get on the escalator.
Might have to wait a few years for them to come down in price though...

In Amsterdam a couple of years back at one of those International hotels I came across a device that allowed you to peruse your newspaper of choice e.g. Times of India, New York Times etc., and then print it.

But yes this in a "minority report" sort of way goes that step further.

No doubt the people behind this will be be looking to maximise.

The interesting bit to watch now is how the industry warms to this or not.

Watch out for those who'll we'll soon read about poo pooing the device.