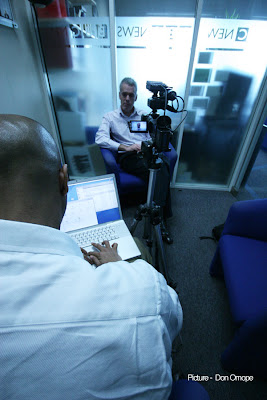 David interviewing the BBC's head of multimedia Newsroom Peter Horrocks. David is using an Sony A1 with a radio mike and a Mac used to show Peter video clips

The question from the BBC's venerable morning news and current affairs talks show, Radio 4 was in response to an item looking at bold science and how scientists are now dreaming up schemes to reduce the world's Co2 emissions, which seems the stuff of science fiction.

Are we thinking the big idea with the threat of a cataclysmic accident?

You could almost ask the same of journalism, though you'd have to think sideways to pull parrallels with an imminent catastrophic event and frankly you could argue that journalism has been thinking big, major big as of late.

So are we now telling the story?

That in effect is the kernal of an afternoon talk at Cultural Exchange in Leicester, a gathering of eclectic professionals from all areas.

I'm deeply grateful for the invitation to speak and should have every reason to feel excited and apprehensive.

Firstly excited because I'm talking to an audience, not soley compriding the industry, so I'm looking forward to stripping back some of the assets we often take for granted in news.

Secondly, I'm excited at the notion of what if, how far can we push the existing consensus of news.

So my wish will be to pose questions about what we do, as much as seek answers?

Are we thinking big?

Are we thinking big

Apprehensive because firstly one ought to; the fight syndrome is necessary to work proficiently.

But also because perversely the audience I will be speaking to, will want to be challenged ( I would if I was in the audience)

Assume nothing, say something. The methodology of lecturing will be much called upon here.

So are we telling the story?

Hah how long is a piece of string?

but some thoughts are crystallising.

There have been seismic advances in news and change, particularly over the last four years, and the environment is still evolving - a slow burn evolution to the formation of a new star to rival the old magnificent one, the Sun.

It's very plausible that the world of 2020 may look a very different place.

And if it is, then one major impact will have been our ideological change to telling a story.

By far the one thing that has us chomping at the bits, ready to critique, made us entrenched in our views has been our ideological position, which in itself is born of other facts e.g. up bringing, environment, social unit, schooling, rationale etc.

Just as in politics, the Republicans and Democrats, Conservatives and Labour, the military junta and local politicised citizens, they couldn't boil and egg together; " No you get the water, I'll get the egg!", Journalism for long has had a polarising edge.

It, the news outlet may have interviewed you, it may have sought your views, but, but, you were never cut out to understand or tell the news.

Of the times I have been interviewed by potential media employees for a staff job, I might have thought yes I didn't get the job because I did not know enough, didn't demonstrate I could know enough, but also that ideologically I may be different to the hosts' wishes.

That's not a criticism. If you're coming to sup at someones house, then they'd expect you to have the same mannerisms as them.

So the ideological notion of news and programme making, steadfast as it is, still holds intact the brandnames of famous news outlets.

And the something that's happening is significant for the reasons that some outlets are softening their positions, their manifestos are embracing new ideas, radical by their traditional standards.

But also that the the big brain of news production which was once carved up between distinct groups is being metasised by new grey matter, with something to say.


Storyvilles' Storybridge sets a tone
A local news team nt in existence five years ago finds the net and an audience; that's the stuff of Storybridge.tv - superb

Similarly even amongst the established players, new ideas e.g. video has them playing new strategies.

It may not be surprising, though I raise my eyebrow in humor, that many of the newspaper groups I have come by no longer deify the broadcasters in the way they once did and want to take them on at their own game.

Fancy that - a newspaper with no video ambitions five years ago wants to take on the bastion of video - TV news production, the BBC, ABC e.g. without a hint of farce in their pronouncement.

The journey at cultural Exchanges will be one trying to explain my fascination with story-telling; a precocious 14 year old stuck on his bunk bed in boarding college reading newsweek and writing a report for our college mag on "the Neutron Bomb- the armageddon of contemporary armament .

But how being on the fringes has some benefits; that the design of the tech standard of journalism I have come to practice embraces CSS, HTML, SEO, Videojournalism, Podcasting, Flash, Multimedia, Director, Promos, Outernet, BUT reside heavily on the tenants of journalism e.g. factual, objective, impartial etc.

And when I say being on the fringes there are a myriad variables I could explain, one being coming from a background in science ie Maths and Chemistry degree.


Are we telling the story?

Are we telling the story is a personal tale, without being David-centric.

I cam across a picture recently which had some effect on me. It's by Paul Cezanne called Apples and Oranges who is described as the father of modern art.

In this picture, well documented, but of use for my news purpose, Cezanne is instrunental in breaking a painting and presumably cultural paradigm.

Ther are multiple focuses in the frame, each telling a different story - much for me like this picture below taken by a good freind Sajo Idrizinovic.

And it's multiple story telling with what we can do with interactivity that should allow us to open up ideologies even further.

Are we telling the story sound like an abstract, but I'd be interested in hearing many thoughts. 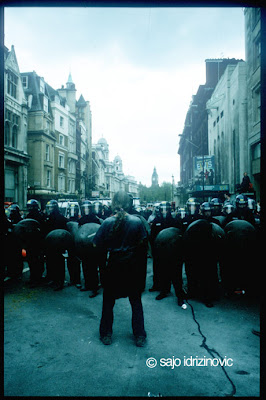 Posted by Dr David Dunkley Gyimah at 9:02 am

The first stage of the BBC’s newsroom integration project was completed on Monday as journalists from the corporation’s rolling television news service began working in a common newsroom with their colleagues from radio and television news bulletins.
---------------
adolfo
SEO