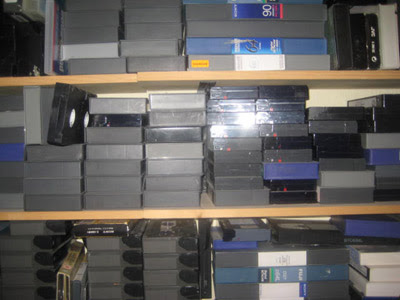 I couldn't tell you why I did it.

Perhaps it was the wow syndrome of actually reporting on air, for the BBC, knowing that sooner I'd have to seek other alternative empolyment, so this was effectively my electronic scrap book.

The Net was still incubating within universities; the web yet to see air, but where possible I tried to keep my reports.

Not any old reports, but those that gave some context to the present political and social ecosystem, by default you hear, as unless you set out from the get-go, few reporters might believe they're repoting something rather of great significance.

But when you look through the archives of even contemporary history, you can pull out some major moments.

In the UK, the Thatcher er, go back further to Wilson, further back, Eden.

Globally, the Watts Riots, the explosion of the LA riots, South Africa's elections, Bhuttos death and so on.


Contemporary sliced history
Within these events a great number of reporters, print and electronic, deliver a version of contemporary history.

However the reports we're likely to remember have some key elements: strong reporting and context that puts the then report into perspective.

Often the report builds in archive; archive that in some way is a narrative of old which trend extrapolates into the present.

An example: any mention of Jerome Kerviel's ( who is he?) is given greater depth alongside Liam Neeson (ah Gotcha).

And it's not that Mr Kerviel doesn't make scintilating reportage on his own, but the context of Neeson gives it a broader peg.

As a self contained report reflecting other nuances and events, it is a slice, however, slither of contemporary reporting history.

It's every reason why when there were riots in LA, Charles Wheelers reports from the 60s - Watts - gave substance- a bigger why, how, when.

It may well be when we calm down a bit over our excitement with video, that when generations look back, the small easy-to-watch hilarious video snaps on YouTube may still prove popular.

But for the many video outfits, newspapers and new broadcasters starting out, an idea of how things were against what they are now - say if this were 2015 - is what will have resonance with that news generation.

And that archive and contextual reportage, what the BBC instituted as a matter of course under its then 90s DG, and was given the title Birt's mission to explain, will be a major player.

If you're setting out you'd be ill-advised to ignore it, particularly when you look back 5 years on and realise THAT report, THAT issue, happened on your watch and you ignored it, never gave it the feature angle it deserved ( Call it the newsnight approach), never realised that you could do so much more than the snap news-in-brief we have become accustomed to.

David's Archive
Above pic shows an array of tapes within our studio with an assortment of tapes of a dizzying array of formats; each one possessing something I felt attached to decided was siginificant.

Some of David's most personable and memorable reportge in no order