Since writing this blog, Duncan and I have since met up. More recently a lot more interest has been generated in his app. In a meeting I would attend with Duncan, a former head of TV at Saatchi and Saatchi Jon Staton swore on being taken through Duncan's baby, saying "this is the holy grail of communications". 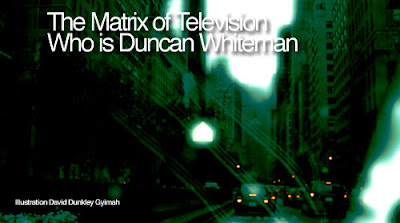 This post is available here as an MP3 podcast for you to download - should you wish of course :)

Google the name "Duncan Whiteman" and the chances are you'll get nothing, which is surprising, utterly surprising.

For Duncan Whiteman, with no hint of irony or hyperbole stands at the gates of a malestrom with the ability to irrevocably change the face of television as you or I know it.

His absence from the web is all the more remarkable since he's had his hand in other apps, though not as a front figure.

But now, now, is on the verge of his opus.

And when it hits us depending on who you are, it'll either be the biggest disruptive force to you profession or a liberation into a territory unknown thus far.

Who is Duncan Whiteman?

He's a genius, a code writer, who can manipulate anything but life itself through line and line of code, a key holder to the matrix of emerging TV


Why you should know the name Duncan Whiteman.
Duncan currently lives in Spain with his family, an Englishman who hails from Leicester, who attended university at below the age we normmaly associate with tertiary education.

We met through a friends friend.

He was in the midst of a multimillion pound pitch - deal, a demonstration, when the group gasped at what they were seeing.

Surely this can't be done.

But Ken Walker, an artist and close friend asked the attending group to stop and take stock.

"Do you know what you're looking at"?

I know that because when my phone rang one evening, that's all Ken would repeat.

"I have got this mate called David", Ken told the group, "He's into all this. Why not let him take a look?"

"Er I'm flattered Ken. OK, but I can't promise anything" was my response.

The meeting
A skype conference chat was set.

Duncan is an habitual background checker; if you're going to be sitting at his table, he wants to know who you are.

But this time Duncan, at least before our meeting did not google me. He felt at ease with my introduction he would later say.

For anyone who knows me, I am, If I'm allowed to say so myself, very easy going. Mannana mannana. What will be will be.

Cyber handshakes by the party over, Duncan went into his shed- metaphorically- and showed me around.

It must be a pisser, because that's what it boiled down to, to know that someone you've never met is evaluating, guaging you, trying to fill in the void which for a man of Duncan's status should be 1,000,000 google pages minimum.

And that the right outcome puts you on course to your ultimate goal.

Let's praise even the smallest achievements we make, rather than criticise the mistakes that we are bound to make. We're human after all: Glass half full, rather than half empty is my mantra


Whos is Kaizer, no Duncan Whiteman
Duncan, frankly sits in that rarefied air of the Jobs and Bill Gates.

And even then we could have continued.

Perhaps also because he's from Leicester and went to uni there, as did I.

And also that he effortlessly moves from media to maths and code, which chimes with my degree in Applied Maths and Chemistry, though I'd be the FIRST to say I'm not even a smidgen in Duncan's league.

What I saw, what Duncan plans needs to be seen, released for all to enjoy or killed - stopped dead in his tracts.

The latter we joke about, because Duncan recognises the disruptive nature of his invention and so do many many others who've had a sniff.

What is it? All I can say is imagine the best and worst of what the media could be in a future of Isaac Asimov.

Many CEOs that control what you do in the media, and have by proxy come by Duncan know that much and have made themselves known to him.

And many don't know the half of it - as Project X, Duncan's not one for showing his hand.

What is emerging as public knowledge has been Duncan's breakthrough at algorithmically transmitting High Definition film down the web, without it going at all.

Sorry if I have lost you.

Among the select few popping by to say hello, include one of the world's most powerful media magnates'. Yes Mr X. He's on Xs Christmas card list.

Are you thinking what I'm thinking?

No, I'm thinking something else that Television's big RIP, that is it's amazing reprieve - will no doubt feature in Wired Magazine and either be something we're all going to enjoy or never ever see.

If you'd like to talk to, hear more from Duncan, let me know and I'll look to set up a conf skype
Posted by Dr David Dunkley Gyimah at 8:05 am