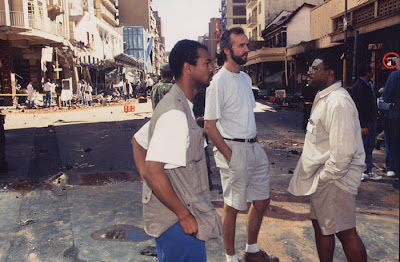 Working for ABC News. On the eve of SA's first all-race election a terrorist bomb rocks the centre of town and shakes my home nearby. We're soon on the scene to see the carnage. Minutes later a colleage from the BBC World Service calls to ask if I can report from the scene. Here for the report of the elections taken from Viewmagazine's how to produce better podcasts.

South Africa's townships provided the backdrop to some of the most scariest reports, which looking back on, I have no idea how and why I did them.

No I do, when you're fairly new to the game, ( I'd had five prior years at the BBC before going off alone to SA in 1992) you're invincible and I wanted to see the world.

I'd boarded a plane to South Africa with nothing more than a newspaper cutting of someone I'd found in a South African freebie newspaper.

I asked him to meet me at the Airport.

Had he not I have no idea how I would have survived.

Alan Swedlow was not only one of South Africa's rising theatre directors, but a thoroughly decent man with a contacts book to die for. He's next door neighbour was a woman whom in years to come would serve as SA's ambassador to the UK, Cherly Carrolus.

inside the Townships
The townships became a hang out. That's were the stories were.

Surprisingly, they were also fairly close to Joburg, (Alexandra is in Joburg) which was a mystery to me.

Of all the newscasts I'd seen, I have never envisioned Soweto to be this huge place, with, yes call me naive, had a BMW dealership in its midst.

The great thing about South Africa is that I was never discriminated in my penchant to want to do different things.

What I mean is that London ( the BBC World Service) would happily take a radio package from me; whilst the next day I was either producing, directing and reporting a tv feature for an international outfitf, writing a newspaper article, or as I became involved in later, working with ABC News. 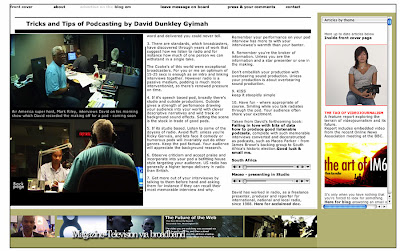 Close calls
I had many close brushes; once I was pursued by a car jackers after a new car I'd hired for a feature for BBC Radio 4, then a couple of Boers accused me of being responsible for concentration camps - being a brit you see, and then the littany of gun fire attacks in down town Joburg.

On one of the scariest assignments, we'd journeyed into Kathlehong, then labelled murder capital of the world. The previous day, our contact told us, several men and women had been gunned down.

"If you value your lives you will do exactly what I say" he whispered forcefully.

Clearly we didn't value our lives because we'd just signed a death warrant saying in the event of our deaths, the team taking us in were not to blame.

There came a point in our night patrol when someone aimed an RPG at our truck, but decided not to shoot when we flashed our lights. We all had night vision goggles on.

In a car coming home one day, a new friend who worked at one of the more prominent radio stations, Metro, warned me to stay down as we drove through one of Soweto's more dangerous surburbs.

As the robbers fumbled with his car keys, he let off 5 rounds into them, fatally wounding them.

The event was reported to the police.

What happened, I asked.

The police chief told me to go away, he replied, adding that the day I empty a whole cartridge, reload and empy another clip, I'll have something to be accountable for.

At that moment he took the gun, a glock from the glove box and waved it at me.

"It's got dum dum bullets designed to cause maximum damage" he said.

I asked somewhat tentatively to feel the gun: cold, was my assessment.


Multiskilling
With a high-8 camera I captured a few scenes that I have archived and will one day trawl through.

But I mention all this given the scorn one can now receive at being called multiskilled.

Frankly it was always about survival for me, but in a way I was no less scared about what you could do and would like to do after coming across Jerry Timmins.

Now one of the most respected senior senior execs at the BBC World Service, I happened to be around when he was a producer/reporter/director at BBC Newsnight.

Such was his prodigious talents that he was always in demand to help with a report.

Clearly I thought if you can learn these other things, aren't you merely raisiing your stock? I think so.
Posted by Dr David Dunkley Gyimah at 8:20 pm