The British VideoJournalism Revolution from 1994 to now 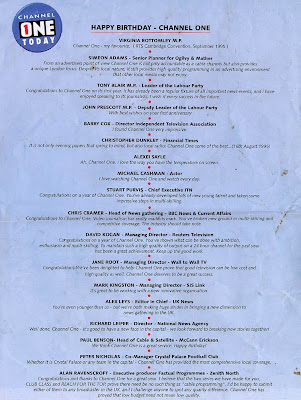 What defined videojournalism? How different was it to Television? Why was the first practitioner in the UK a newspaper outfit? And where next can it go as the main debate focuses on primary implementation?

In a series of talks and webinars I'll be producing facts and films from archives, never seen before, that might give you a better understanding of what we're doing now and how that conversation developed 14 years ago


The British VideoJournallism Revolution
No company, or era captured the essence of this brave new form of journalism called Videojournalism in the UK than Channel One TV.

For its first birthday, the accolades as you can see ( Click Image) were a fulsome acknowledgement of the changes enveloping the media; the seeds of change had been sown.

What its first 25 videojournalists knew back then, supported by innovative management and technicians, will not surprise many of them today.

After the first year some of Britain's biggest names in the media and politics paid their respect.

Having been present at the creation, and having brought the VJ concept to Channel 1, as well as having trained all the VJs, I am most interested in this. Please feel free to get in touch.
Michael Rosenblum
Michael@rosenblumtv.com

Indeed, from this end, some evidence at least that the industry had high ideals about the concept wat=y back when