The Levels and Perils of Videojournalism


on the front page of viewmagazine.tv you can hear a radio report from David for BBC Radio circa 1992 on how the then Conservative government planned to tackle youth crime by penalising parents. The present government want to adopt something not too dissimilar.

"So you wanna be a videojournalist?"

"Have you got a camera? Yes! You're a videojournalist"

It may sound flippant, but this scene, if anything, captures the essence of this evolving discipline and equally importantly intimates one thing: "There is no fixed stanza -everyone has or can develop their own style and you probably don't need training".

The term has evolved, metamorphised since I first became privy back in 1993 at BBC Reportage when it wasn't even called that. 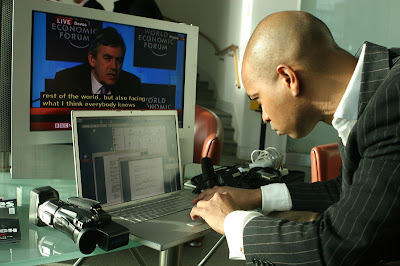 I got my second national TV job in 1992 on the groundbreaking BBC Reportage by having to send in a piece to camera on a VHS video camera, before becoming imbued in the craft more diligently later on with Channel One.


Q and A
One of the over riding questions I get asked is often: "We want to do something new, something bold".

I have a couple of VJ shooters whose own work I admire and the one thing that is prevalent with them is their understanding of the form of television production.

I often say with clients, students etc that the ones that will wrestle most with the conversion to Vjism will be those with existing dye-in-the-wool television skills, but there's a caveat, that is if they're not prepared to experiment.

Some time ago some journalists I was mixing it with physically crossed TV's line, but technically the shoot worked: what's the problem?

At its heart videojournalism is television, film making, artistry, motion graphics rolled into one.

And from this new Lego set, some blocks have been pulled out and discarded, but videojournalism is still television making, just as good feature television making is film making and to push the comparison impressionism or cubism is art.

As a genre Vj looks to push the boundaries, but it would be a brave practitioner that threw the baby out with the bath water.

It is folly as one TV Network has proclaimed to do away with cutaways on the strength of how they became lambasted: it's the execution not the technique itself.


VJ TV, Film -one and the same 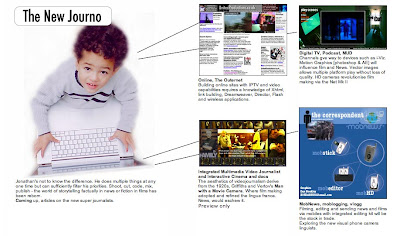 You still need the language of television, which often yields an amusing scenario in lectures and on the circuit.

If you want to learn a foreign language, you're ahead of me aren't you.

Similarly if you want to understand Vjism and where you might break rules, or re-apply new ones, watch lots and lots of TV, study lots and lots of good film directors, search out many many videojournalists and deconstruct their work.

And yes that includes some of the greats: Eisenstein and Lang: watch this for a history of German film.

VJs strength lies in its visual interpretation of an issue or event and how that is done is very much the stuff of film making.

You take the project as it comes, falling back on your visual linguistic knowledge and go for it, which is why good film makers can handle a plethora of genre.

A confident VJ/ film maker knows when to be restrained, even tell the story in the latin of TV News and when to go "Bourne".

This week the editor of the FTs online operations called me into his office: "You'll probably want to see this, part of your in-house advice last year".

It was a sturdy piece of videojournalism, with sequences which pleased the eye and it worked very well, not just for me, but the FT's audience as their general huge rise in online figures show.


Deconstructing VideoJournalism
Yesterday a local newspaper in Oxfordshire whose journalists I have swapped ideas with emailed me a link for a critique (I try very hard to maintain a link and help where possible those whose path I have crossed).

What do you think about the video; a woman recovering from an illness?

Fine my answer, but you neeed to isolate her, consider your mis en scene and also get her to speak slowly.

My BBC Radio days have taught me a few things about speech. If while speaking to some one you begin to subdue your voice as you articulate what you want, your interviewee will follow.

In my doc for BBC Radio 4, First Time Voters, I asked my interviewees to take a bath or relax and I'd interview them around 9 in the evening.

I had that luxury and I knew at that time that with few distractions I'd get better material.

Of the four interviews, one broke down crying: I stopped the tape out of empathy for my interviewee and was roasted by my award winning radio 4 producer.

Another one threatened to almost hit me (he got so passionate) when I dared to ask why he wouldn't vote in the general election and the other two dug dip inside themselves.

My VJ friend from Oxford is now investing in a black backdrop to isolate his interviewees where necessary.

VJs K.App
The most remarkable thing about Vj is the one major thing that was its big sell in the first place; that astonishingly one person can do the job of at least four people: film, do sound, edit, and voice.

That is still remarkable and by default the pay off is an extraordinary reduction in the work flow costs, though I know VJs who come at the price equivalent of the the four combined professions.

And to this hazy mix of attempting to do everything and succeeding, the anti has been raised further.

IM6 Videojournalism is what I might call Total VJ, oftened likened to the small self contained unit of special forces, where in time controlled environments, armed with laptop, cameras and sat pack you're pushing the edges further.

Influenced by the writings of Leonard Shlain and Manovic I've capture this in the below equation. If you're a maths major it should appear familiar.

On the other hand if you pick up a camera and you can shoot, you're still a VJ, at least in my book.

David will be at Apples store Regent street talking about videojournalism and how some of the UK's leading brands are using it.
Posted by Dr David Dunkley Gyimah at 7:03 am