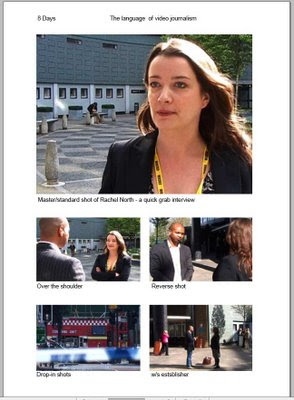 Perhaps one of the most gripping pieces I have produced recently was talking to Rachel North.

Gripping has nothing to do with me the producer but the person being interviewed.

There are many technical reasons, as opposed to its creative elements, why video works and it can sometimes be taken for granted.

If you watched Brit TV features in the 80s and 90s there was a huge safety net for why video/TV should always work.

Yeah but David those cutaways to the serious-looking reporter (you) standing there are totally lame. So TV news! So fake!

And what's with that intro with the siren? There was no siren and no yellow police tape the day of the interview. I think you needed either a VO intro or cut that whole bit with the siren, eh?

She's a great talker, you're right about that.

Hey Mindy How are yer?

Cutaways in situ are still the visual construct that drives the visual narrative.

After what's now been called the Yentob saga, where it was first thought this BBC senior figure inserted himself into his film which he discovered he didn't C/As came in for a bit of a bashing.

One network even dropped them.

But as a VJ or TV bod it's still the device that will get you in and out of an interview when there's little picture, plus it brands.

The looking serious is exactly how I felt listening to her talk about her day - again in situ effect.

The siren and pictures at the top is the window into the piece. That's both my arc and mis en scene.

It's a direct reference to the event which she was a part of so visually sets the scene.

I can see your point, yes there was no siren on the day of the interview, but I know you're not saying don't use archive or create "windows"

That interview took me about ten minutes to do and just as much to post.

Time wasn't the factor, but it's what I call "kill what you can eat".

It's also something I still advocate. I have got a limited time - secs for user attention.

A V/0 may have worked, but to those unfamiliar with my interviewee, I'll ask myself visually what gets their attention, her or incident.

There's lots of things about TV News I'm not a fan of - and I have got a lot to say about that.

Yet the language of TV news or say cinema has some things as a VJ we build upon.

Personally done well,( and that's a point in itself) the insert construct ( C/A) I believe won't disappear.

But in the end it ain't about me, gonzo or TV mode. If I feel I can get a user to the end of interview, then job done.