Look Back - rummaging through Viewmagazine.tv

A look back at some of the items that have stirred me/viewmagazine.tv to thump our crate at our own little slice of cyber speakers corner.

For the next two days viewmagazine.tv's front page will have its front face changed more times than ... than.... Oh Gosh who can I not libel.

Since the morning it's been an IM6 - Interview with Chatham House Director from 2001-2006 that took centre stage.

Then a a report: Is Television Killing the Arts?.
Commentary and viewpoins from punters down at the South Bank Centre talking about TV's relationship with the Arts

From 2 GMT onwards be a multimedia Videojournalist - promo from Cairo in the style of Bourne - er sorry it looks mothing like it.

From 5 GMT 8 Days - the film about the UK's first journalist to become videojournalists using the Press Associations ground breaking scheme.
To date it's trained scores of newspaper journalists

Then sevenish Robb Montgomery and David in Cairo with a podcast that has us gabbering on about videojournalism and visual storytelling.

Penultimate change playing a little flash diti which bookends to How to Podcast - similarities with radio using experience working at the BBC World Service and the BBC's radio station for London.

And finally for the day - how do you become creative:
"....While the arts has come to be recognised as a repository for the creative thinker, joined by science maths, and architecture , it's not a word associated with journalism.." 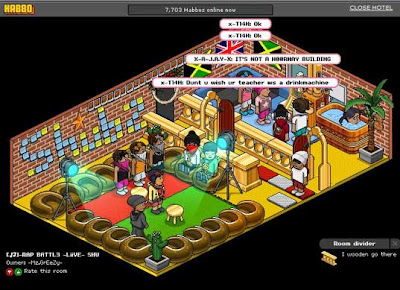 Meanwhile my teenager nephew is on habbo. He's in this pic with the red bandana- just gate crashed a party VIP, he says. It's second life of sorts for TEEEENS ( somebody's going to scream now and say "no it isnt!)

He's just off to a club called the majestic which I'll show some pics later.

I've just asked if I can do a profile of a hip teenager, though "hip" yurk I'm showing my age.

So profile of an alright teenager

Top things about grown ups
1. Don't listen to what you have to say
2. That's it basically

Lets give it up for Omar Tackie - 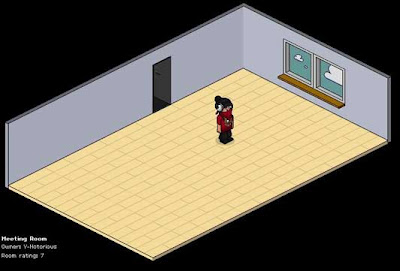