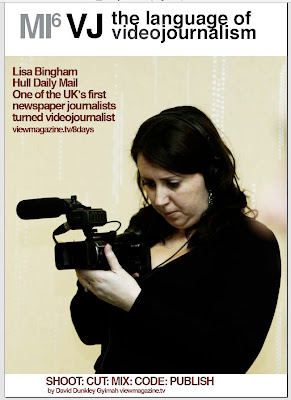 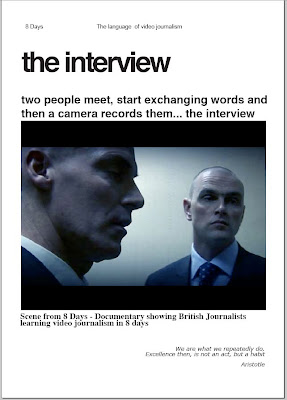 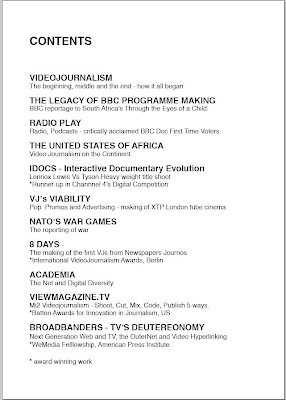 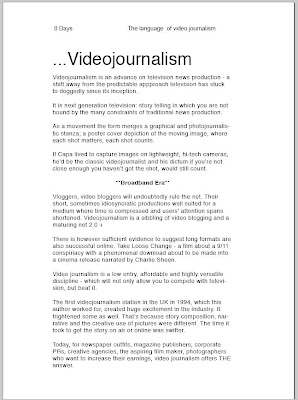 I have put together a draft for a book on videojournalism which covers a broad palette from working at the BBC in the 80s, looking at Vjism in the 60s; the dirty word in the UK media, Channel One TV; to the more up-to-date talking about modern forms of storytelling.

Story forms that include videojournalism gonzo, techniques and methodology on the Press Association course and exchanges with a number of outfits in South Africa, US, Berlin, Norway and the UK.

Part educational - a sort of how to without the clunk clink of it all - and part personal journey, it's about story, story, story with hopefully some interesting anaecdotes, some almost bordering on the absurd.

Example: always pack condoms on expeditions or foreign shoots, you'll never know when you'll need to protect your camera from sandstorms or rain - yep I don't bother with the rainproofs etc.

To date there's been, oh dear, near a 1000 journalists I have trained - loose count and that's going some way back.

If you'd asked me what I'd be doing when I left Applied Chem school I couldn't have told you this, so ( shrugging shoulders) sometimes I stop and become a wee bit amused.

But we're enjoying it which is why we do it, isn't it?

Here's an old draft of the front page which will undergo further changes.

Videojournalism is an advance on television news production - a shift away from the predictable appproach television has stuck to doggedly since its inception.

It is next generation television: story telling in which you are not bound by the many constraints of traditional news production.

As a movement the form merges a graphical and photojournalistic stanza; a poster cover depiction of the moving image, where each shot matters, each shot counts.

If Capa lived to capture images on light weight, hi-tech cameras, he'd be the classic videojournalist and his dictum that if you're not close enough you haven't got the shot would still count.

Videojournalism is a sibbling of video blogging and citizen journalism.

It's a low entry, affordable and highly versatile discipline - which will not only alllow you to compete with television, but often beat it.

The first videojournalism station in the UK in 1994, which this author worked for, animated the industry.

It frightened some as well.

That's because our story composition, narrative and creative use of pictures were different.

The time it took to get the story on air or online was swifter.

All you'll need is a small lightweight HD camera and PC with film editing software - all highy affordable - and an enquiring mind.

From short news pieces you'll leap to lengthier features and THE FORMAT, before breaking that rule.

And you'll learn all this in a short amount of time.

From your shoot you'll be able to publish 6 ways, the audio for podcast, stills, multimedia, video, a promo and of course your article.

And you'll find videojournalism will sharpen your video blogging skills or what television calls the piece to camera ( UK) or stand-up (US).

If nothing YouTube has shown us video nations we're driven by video.

As a videojournalist your instinct for visual story telling will heighten. As an organisation you'll increase traffic to your site.

As a manager you'll look at the bottom line and realise the cost and returns from your new venture more than square up.

Videojournalism isn't cheap, but it's a resource you can ill afford.

Be part of the visual video revolution.


ref: posted in Videojournalism Today
*Multimedia posting
* Film site -Multimedia Film released in January
* Trailer for Mi6 Videojournalism
* Scott Rensberger and Claudio Von Planta Two of the many accomplished VJs around the world.
* Amusing little ditti - made in 99 Featuring Dany Glover - as one of his producers working at ABC News South Africa in 1994
* Flash promos circa 99 for Lenox Lewis, Chatham House among others The beauty of these were their file sizes around 200k and interactivity 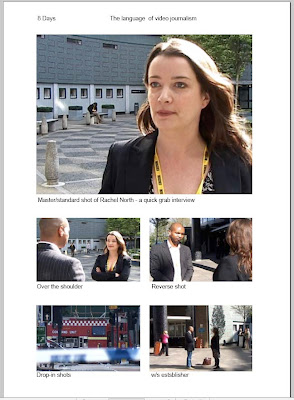 Posted by Dr David Dunkley Gyimah at 9:31 am