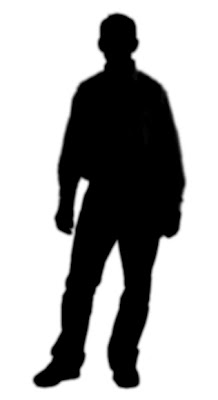 To you and me he has no name.

A silhouette which we no sooner would ignore; more emails to read.

But Mr Man has an identity constructed to sate the digital appetite of many apps.

On Facebook, he's posted his birthdate (unwise, but there you go) and where he lives; his circle of friends add to his digital DNA, and then the books he reads colour in his background.

His cinema preferences and blog posts scoured over by marketeers is cross referenced with other social networks he belongs to.

We know he lives in New York and using his name and available public data we can track his travel movements.

Each time he logs on, they're logging his web trail - how long he stays on, what he talks about.

He knows his films, science fiction e.g Children of Men, Alias, Mission Impossible, so he gets a free review ticket through the post.


Do you know who you are

Marketeers used them extensively in the 80s to pump brands; the cool kid in the block.

Whatever he wore others followed.

Now he simply goes about his business.

The professional critics days may be numbered, but not him.

He clusters around like minded people and as he matures by 2015 he is the new net superstar - simply by being.

Simply by understanding how it all works.

And then came the Semantic web

Happy Xmas - as David takes time out with family and friends.