The emerging language of bespoke news and programming 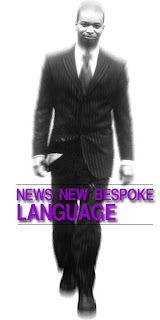 Huddled over a small screen, a bagel in one hand, a young boy is furiously tapping away at his mobile, whilst across the opposite seat a business man tututs.

[ 1, 2, 3, 4] He's been staring at his screen for the length of the 40 minute train journey, intermittently indexing the screen which appears to activate a new sound stream.

Truthfully, the two could have continued ad infinitum.

This is the era of bespoke news.

Packets of news, with no beginning, middle or end, just information whose content and direction you're in charge of.

An anathema in itself, as the very idea of news at the moment, designed top downwards is seen as bespoke.

You can also read this article on viewmagazine.tv

[ 1, 2, 3, 4] Ozwald Boateng is the dashing daring young buck who dared take on an establishment in Britain.

Savoy Row, as refined as royalty and the essence of Britishness, Ozwald would launch a concept to challenge the status quo: bespoke haute couture.

In his plush offices just off Savoy road, he is recounting his life story to Al Jazeera's Riz Khan for a special One on One. 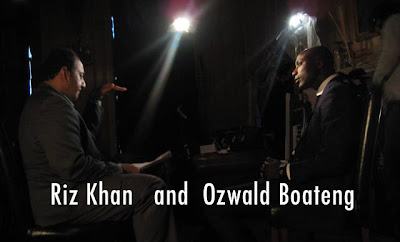 Riz Khan boldy entertained an idea for me to shoot in between the programme takes providing at times some rivetting and loosely structured converation between the two, where in some cases Ozwald is inadvertently interviewing Riz

It's the first time I'm hearing Ozwald's journey despite knowing him for near twenty years, but it symbolic for what he has achieved, in concert with a new mood for change in design.

Today, news, another bastion is having a pasting from all sides; an onslaught from DIYers and more poignantly a stylistic collective of journalists inhabiting a new news econiche, multimedia.

[ 1, 2, 3, 4] Multimedia is News' bespoke couture~ a language crystallising around the edges of designers and news enthusiasts: old and young raiding the news space for attention.

Honed amongst the labs in MIT, it's come a long way mutating in form and function.

The trend at present is to attempt to cull news info by throwing at it the following variables: text, audio, video, and pics.

Multimedia - the one stop solution, delivering many media.

But through a series of interviews with industry figures, from the national Telegraph to design student it's apparent that it has as much universal form now as an amoeba.

It means different things to many, but an intriguing quality of this emerging format is that is stands to become a language in itself.

Consider this: the central tenant of the news package is the unit of multiple voices within one conversation between the network and its constituents, you.

It asks the question what, where, when how, and why - news' k. app.

It seeks self containment, closure: he said, she said supported by clips.

And it's delivered by an expert.

In the land of multimedia, the package is open ended, a conversation between many.

It posits temporal as well as spatial questions: geographical relations that connect each other.

The inverted triangle which so governs news disentegrates into a series of smaller triangles each interconnected.

You start the conversation and we'll move it on.

In an era of nuclear media, ones and zeros enveloping into columns of information, it's a wonder why we haven't harnessed a fraction of what we do.


We Kill more than we eat - wasteful

The journey, interconnectedness of pulling together the story, over space and time are considered almost irrelevant.

The report equally fixes us with a narrative with no room for flexible entries elsewhere along its linear well defined timeline.

What's discarded out of hand any question beyond that of its author of relevance.

Multimedia is twinned with interactivity.

It is cause-effect- cause: time and journey matter, none of which news in its present form delivers on online.

But it's early days. Leonard Shlein in the Alphabet versus the Goddess makes a convincing argument about right side brain funtions e.g. imagery dominating left brain attributes such as literacy.

We've seen the results with television's inception, but it, TV, has largely remained unchanged since servicing an information starved populace.

The Nets coming of age, multimedia which I'll return to in a follow up has the potential to deliver news and info not as a 360 degree axis, but zero.

It will fold on itself- zero sum

In next article I'll expand on some of these notions, but before then you'll have noticed I have named certain sections of this post as [1.2,3,4].

If I changes the numeric order of this "stanzas" does the text still makes sense.