As we bid adieu to this year in expectation of the next, a look back on a few things, in no particular order of fun, frivolity and work, which are now deep memory pylons.

Most are just images which capture a moment and reveal their own story.

FT
One of the real pleasures was working alongside the FT.com team.

Sharp as razors, as you'd expect, but full of fun.

How often, from afar, we mentally prep ourselves only to be immensely surprised at the turn of events.

The digital pages of the FT will be one to watch with a new team unravelling new areas of multimedia reportage. 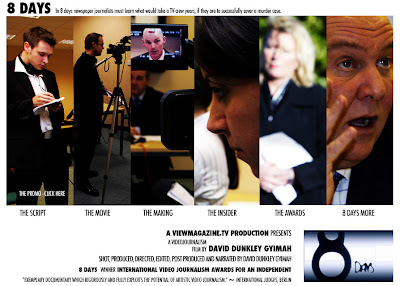 It may have weathered, but as new outfits or traditional ones try out video and the rest, 8 Days still appears a favourite from my logs.

As with most of the dedicated films on viewmagazine.tv there's a sense of he movie poster about it; something that heavily influences my work.

You can't see it 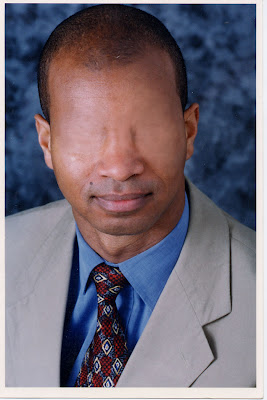 Using the clone tool in photoshop I comped this image to illustrate how some of us just can't see it, this new Event Horizon.

In a film (was it Greenaway?) I recall a beast had his eyes in the palm of his hands.

What was that film again? 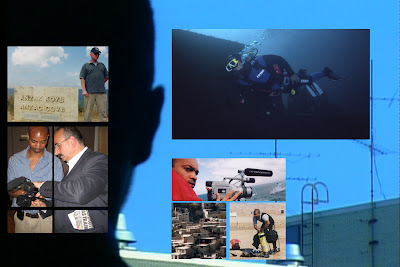 I've often interchanged this coinage IM6 or MI6; the latter more interesting as that's the acronym of the UK's foreign intelligence service.

But this image was one of 6 on viewmagazine peeling back the idea of integrated multimedia video journalism. 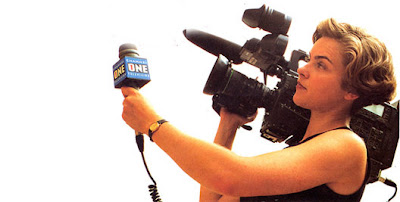 An image of an old colleague from the days when we lugged around a huge camera costing 40,000 us dollars working at London's equivalent of New York One.

Rachel, now a professional motivator, has recently been knighted with an MBE for her services to Afghanistan teaching and empowering women with communication skills in radio.

Take a 300,000 US dollars car, a network TV presenter and me, the VJ, and this is what you might get from an unrehearsed shoot.

My friend Kevin was taking the car back to Ferrari's base and asked whether I wanted to come along.

He was late and so wasn't really up to many of the sequences I threw up in the air as we drove.

"David, sure, maybe some other time, but I'm a bit late returning the car".

But this is waht we got and you've been generous.

The Ferrari 599 GTB isn't she something here for viewmagazine.tv which has far less compression or if you prefer here on Brightcove
Or here on Youtube.

And how, how can I forget the amazing Nancy Ginindza - a former student of the University where I lecture.

The head of the course, Kienda called me up:

"David quick you gota come and listen to this".

Nancy's music, raw energy is the stuff of William Wallace.

Kienda and I have spent a few late evenings at her gigs trying to capture what she does.

She hasn't broken through yet, but if we can still play a part - great.

Looking forward to devising her promo in the New Years

The eyeless monster movie is 'Pan's Labyrinth' and its on the telly (remember, that thing we all used to watch?) over Chrimbo...have a good one! ;)

hahahaha we're saying that now, what do you think our nieces and nephews will be saying in oh 10-20 years to come.

You're mad.. and what happened when you wanted to go out?"

"Oh we turned it off"

"You what. Do you have any pictures of this thing.. Uncle you're ancient!"

footnote: The family used to site around the wireless once as well.