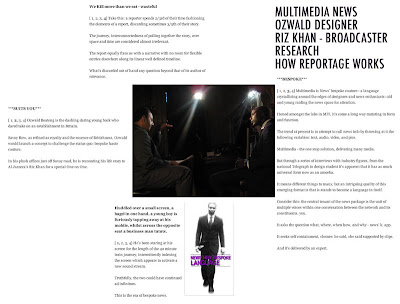 Is this how it could be?

Within the ecology of the article above lay many strands.

As an introduction to this thinking; the text resembles blocks of information.

Right side brain interprets it almost as a picture, given its shape which is dominant over left side, literary.

The skewed nation of the positioning may suggest a hierachy, but truthfully it was placed randomly around an aesthetic.

Each block should be able to expand to the screen or shrink.

Key words light up other texts; they're viral.

There looks to be a beginning born from the latest posting, but it's a circular dialogue.

The picture is video - a multi-deliverable asset combining Flash, Video and Text.

I have gone behind the scene to capture elements that could add to the interview or stand alone.

There are various nodal point along the lines of the interview which could activate other films such as this one - an earlier interview with Ozwald . 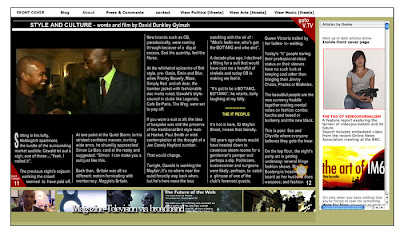 In this film you'll see some of the emerging ideas of what I might call "outer space" interviews.

Ozwald asks me a question designed to be off camera but is kept in to reveal the nature of discussions: the interview and the non official interview.

If you wan't to read the linear form see previous post.

Soon I'll post the interview
Posted by Dr David Dunkley Gyimah at 10:26 am