Chuck Norris and the PCs 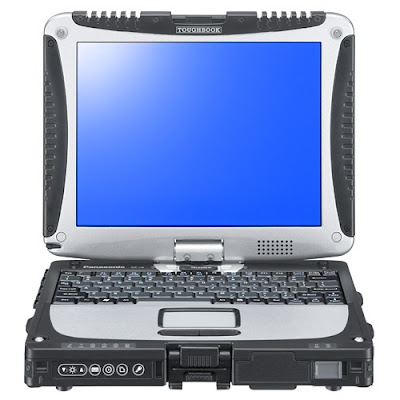 Mid afternoon in a quiet surburb, then all hell breaks loose.

He's flushed down a toilet, thrown from a second balcony flat, then kicked into touch like Johhny Wilkinson ( Rugby) with that sweet foot of his.

No not Chuck"hard as nails" Norris.

The PC that goes by the name: The Panasonic toughbook.

And still it works. IT WORKS!

If you know any of the Norris' jokes I won't bore you suffice to say this thing roundhouse kicks Norris before he considers having the harddrive for waffles with his grits.


Chuck Norris doesn't use PCs. His fists keep smashing the screen
The PCs were designed for combat life, but like many military apps are finding their way into civie street; workplaces where there's a high risk of dropping things, like hospitals.

"Woops! Sorry Mr Nash, did you bang your head.
Poor you, but my computers ok."

Frankly there should be national competitions testing its thresh hold as well as questions being asked of other manufacturers.

Yesterday I bumped into a colleague and jolly well, damn near damaged my hard drive.

Now that's what I want for Christmas.

Get them quick before Chuck does
Posted by Dr David Dunkley Gyimah at 1:27 pm