Some UK train services offer free wifi while others, whwther you're travelling first class or not make no effort &*^$£@??

Travelling on the train, a couple of overcooked thoughts.

Firstly those British Rail ( an anachronism) trains not providing Wifi, wake up.

The service provider contracted to the chain of Premier Inns wanting to charge £5 an hour up recently from £2.50 for 2 hours, WAKE UP.

Is there no end to corporate greed?

The changing face of VJ
This week I had the pleasure of exchanging ideas with a really nice bunch of journalists and photojournalists looking at the VJ way of doing things.

Richard shoots a lot of wildlife and has the most amazing footage ( if I can convince him to grab a few frames) of filming a stags on one of the UK's richest wildlife plains,Exmoor.

Seems he was so well camouflaged that they went about their business without sensing his presence.

Wildlife, in particularly the BBC's Cat Diary series is a big user of DVcams, but Richard could quite easily become a name to watch in making videojournalism wildlife his own. 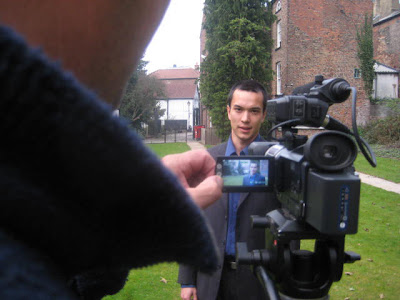 Two others, Martin and Martin from regional newspapers are photographers, Sarah's a web editor and Nick's a sport reporter.

The nature of Videojournalism and those it initially attracted is changing swiftly.

And equally indespensable is the contribution to the ever increasingly important multimedia presentations by, primarily newspapers.

Video journalism has become a bed fellow with multimedia - a word so vague when it attempted to make its presence felt in the late 90s if you weren't producing CDRoms you didn't have any idea.

Now that's all changed and the application, Flash, I stumbled upon at version 1 something is a must-have in any newsroom, broadcasting or newspaper worth its salt.

This is one of the first major pieces we made back in 2000/1 - an interactive documentary, the Family which would become runners up in Channel 4's Mixed Media Unleash the Talent comp and lead to work as Lennox' Lewis video journalism and multimedia movie maker.

Yes there's fabulous work in the UK, particularly from the graphic design fraternity. . .

If you haven't booked for Flash in the Beach (FOB) in Brighton, what are you waiting for.

But take a million TV conference back to back touting future TV and you're still come away with a fraction of new knowledge attending a BD4D ( By Designers for Designers) gig or FOB.

Watch out for what I predict will be equally big within the new journalism way of doing things: motion graphics.

Gosh I sound like a broken record, but here's a well worn article for Journalism.co.uk, which was relevant then, and more so now with Hillman Curtis, Newstoday and BD4D showing exemplary work.

It's only a matter of time before the kind of work you see here on Multimedia shooter listing work from say the New York Times and this Film makers in Residence becomes the norm here. Isn't it?
Posted by Dr David Dunkley Gyimah at 9:59 pm

One of the Martins here (not the scottish)from your PA course earlier this week. Thanks for the mention, a pleasure to spend time with you, very inspiring. Planning my first piece at the moment.

The pleasure was mine. Post me a link email or otherwise when you do your piece, if you want some feedback.