A sporting question of Identity 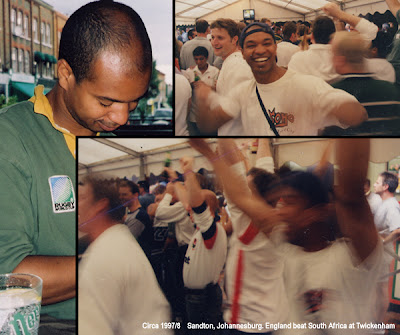 I passed the test.

It is known as the cricket test, the Norman Tebbit test.

Where are your loyalties?

In a moment of schism, who do you support, the country that you live in or that where your folks are from?

It has pride of place in cricketing folklore.

Oh that strange game where grown up men try to thwack a wooden ball across a field.

Rugby, if you're not a fan is no less strange, but I digress.


Wherever I lay my hat
My hat is in South Africa, but my heart is here.

I bought my South Africa World Cup shirt in 95 at, was it then still Jan Smuts or, Joburg International airport?

I was on a visit, but the memories of almost 24 months living and working in South Africa were fresh.

The shirt was my treat, a legacy to the country that in all intent I would have stayed had I worked out citizenship.

The 95 World Cup was such a unifier, the symbolism truly awesome.

Yep South Africa is where I would now make my home, intoxicated by such love to emerge from South Africa's victory.

I hear similar things, the country turning green before their showdown with England.

Sporting triumphs have the knock on effect of lifting nations.

And this win should be a much needed shot in the arm for South Africa still with its share of problems.

In 1997 back in SA on hols in a bar in Sandton I watched as England trounced South Africa and from the look on my face you can clearly see what it means.

Yesterday I could barely watch the screen. In fact I chose not to watch it at all. Coward!


Not all stories have a happy ending
The poeticism of England winning was to great not to be trumpeted, but South Africa winning was not so painful.

The trophy has moved to my adopted home - a charismatic rainbow nation, whom in years ahead will also stage the beautiful game.

But Eeeeenglaaaand, Eeenglannnddd, is the sound bouncing around my head.
Posted by Dr David Dunkley Gyimah at 10:47 am