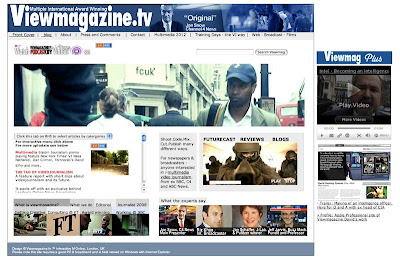 It takes time to load, but adding a new face to Viewmag going back to its original presence of embedding video behind front interface.

It's part of a theme for an authored film on multimedia I'm making for trade mag The Press Gazette, so I'm looking around for new material.

Thanks to all for previous email feedbacks.

The rollover sound is part of a longer interview with visual editor Rob Montgomery in Cairo.

Open congrats to Claudio who contributed to Long Way Down on BBC TV, where Ewan McGregor and Charlie Boorman make their way on bike from the UK to Cape Town. You can hear Claudio talk about one person shoots on view here

Also congrats to Nancy whose music features prominently on Viewmag whose Myspace features a recent interview with the BBC's main London station.