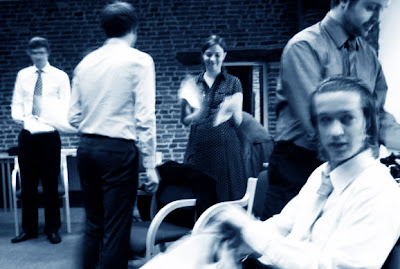 Back in August I had the pleasure alongside some senior industry figures - predominantly from the Press Association to visit the Telegraph's offices.

A lots been said about the Telegraph - but on the ground showing us their studios coupled with an hour tour from one of their senior execs, you easily got the sense that you hadn't seen half of what you've read about.

Which is why at some point I'll release the podcast of that tour. But there's more. This week I had the pleasure of meeting the Telegraphs's creme de la creme next generation journalists.

These are dedicated multimedia journalists, mainly of post grad calibre, many from City University, whom are being put through their paces in the black ops of journalism - multimedia.

They do everything. I mean everything. Merge newspapers with broadcasting and online and that's the new super journo.

Eight of them chosen from 800 whom may well set the standard for the shape of the industry.

I was able to film them in a number of settings to provide a snapshot of their thinking, so look out for that.

But it was their demeanor and outlook that I also found engaging.

Law, subbing, videojournalism - these are hurdles they're clearing.

The end game will be intriguing for in that team is the making of many editors and leaders.
Posted by Dr David Dunkley Gyimah at 9:56 pm