Get creativity with creative precision 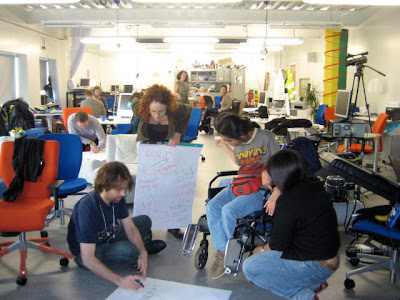 Forget everything you know.

Editor of 20 years standing, director with 15 years in the field, artist and commissioner with awards? Forget it.

It's time to get wired up, give youself a work out, bench press 2151b with your mind: Origami lessons, late night Chinese language classes, or how about those glider pilot wings?

In my case can I do the PhD programme, peleease?

I had heard of them, read about them, and now I had the chance to feel one - the SMARTlab.

Ever joined the Territorial Army or observed the draftings on TV and the Warrant Officer's (WO) notion of character-building.

"What do you mean, you'd like to stop so you can breath some air", clips the WO.

SMARTLab is the antithesis of this, but you'll inclined to question your self worth all the same.


Who am I?
I started off composite, intact, but soon perceived I knew nothing.

A black cloud hung. Was I some imposter about to be found out?

And then slowly, surely by a methodical process I experienced a rewiring.

You find new thought pathways, and then more.

And so it goes until at some point, in the future, you emerge from the end wringed, squeezed, exhausted, pressed, more certain of what you thought you knew but weren't sure of at the time.

Well that's the theory and that's some time away, millions of axons firing-off away.

But for now some clarity emerges about old thoughts.


I am
Director Professor Lizbeth Goodman asked the question, a game, which effectively probed for a deeper understanding amongst the cohort's research: "Whatdyameanbythat?"

That wasn't the actual question but you get my drift.

At that moment, for once, a sheath of clear thought.

Lizbeth would express her surprise. For the first time, she'd got me.

Truth, for the first time, I'd got me. She wasn't as half surprised as I was.


Clear Water
Being forced to self evaluate, ask yourself again and again what your ideas stand for is a template worth considering.

Imagine you've been taken out of your comfort zone, but you're amongst friends with no fear of ridicule.

It allows for a certain openness.

It's akin to two dancers tangoing at close quarters, whom moments earlier had never met before.

Go on try it at the next club.

Chances are you're cantering forward with a space the size of the grand canyon below both your waistelines.

You're still closed off.

Cross Pollination
This week I have been privy to Location-based learning, the process of creativity, motion capture in art, the alternative Net (rant), Immersive game culture and experts from Nesta, to name but a few.

If you could replicate the programme across work, bars, gatherings, outside Liverpool street station, sparks would fly.

If you could amass a group of editors and have a coterie of mash-up youngsters take over the board room, sparks.

If you could grab some broadcasters and show how laptop programming could revolutionise creativity in production; if you could mix the commissioners with the technologists, somehow I feel you'd be inviting new paradigms.

For somewhere in there you're embracing that new mantra: If you want to know about water, don't ask a fish.

And that author you respected towards deity status may just seem more human; still respected, but human.

"Kill you darlings" was one solid piece of advice.

"So what one thing would you take from a talk around the conscious and sub conscious, which you could incorporate into you work?"

When was the last time you saw a presentation on fantasy play, feminism or the sub conscious and thought that'll do me nicely.

But, pause for a minute.

We do it all the time, often sublimely, erratically, with no coherence to our actions. On the odd occasion, it's even naked.

That visit to the design studios, Society of Editors conference, consultant who charged the equivalent of his mortgage - all events which would stimuate ideas.

The big difference perhaps is these were obvious transferable ideas.

They were safe, within your scope and because of that you felt comfortable.

Most times also there's no pedagogical form to capture the work flow of the idea.

The answers that drive new paradigms invariably do not exist in the spaces we already occupy, and even if they do they require a generosity, a velvet hand to cajole you, bad cop you, make you think.

It's scary and makes you forget everything.

Everything that is which just might lead you to doubt yourself in the first place.