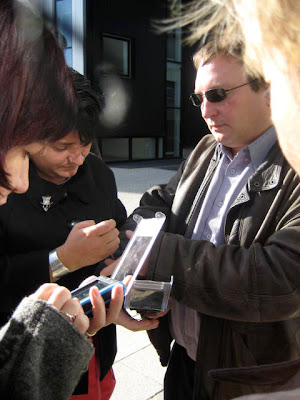 It's always exciting to broach new areas of the digital plains, so I listened with due attentiveness to Celine Llewellyn-Jones, an academic and practitioner in e-learning, education and location based games.

Celine, also a blogger and second lifer, spoke about her passion and a couple of the projects she's involved in.

She referred us to a game she'd set up called Dockers Dilemma in London Docklands in which museum-goers get to explore the surrounding areas of the docks, e.g. Blood Alley - where in the days of old dockers would have to carry sacks of sugar, shredding their backs with trails of blood on the floor. bbrrrerrr

According to visual stats she showed education-based location games are not only huge, but educational programmes are as much a hit as commercial ones.

With all the hutzpah over child obesity or indeed anti socialness of fixed room games e.g. X-box, this doesn't take rocket science to see how location games offer a great alternative.

Several years ago not too far from our present location Matel toys gathered a couple of journos into a huge warehouse and unveiled their cyclop visor and zapping space guns.

More recently Nato's war games which blurs the boundaries of sims and location based games has been a surefire winner for trainee journalists learning conflict corresponding. 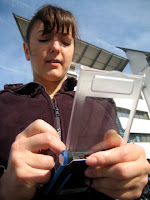 Celine cnnecting her GPS
The catch however, not everyone can play and then again it requires resources.

For the games here all we needed was a GPS handset and space, which was all the excuse needed for a group of us to have a try out.
Posted by Dr David Dunkley Gyimah at 11:41 am