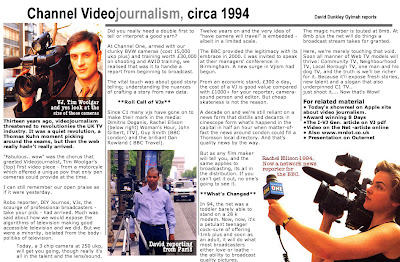 One of my first pieces for Channel One circa 1994 was a report about an ambulance and hospital service; how they'd managed to streamline their response time.

I remember at the time completing the last leg of the mini feature and being offered the chief executive as an interviewee.

Chief Executives rarely put themselves up for the camera so it was an opportunity to conduct a longish interview with him with my camera on sticks.

I didn't know at the time ( serendipity ) but when I got back I cut two pieces - the report and then the Q and A.


Channel One TV
Channel One TV was a cable company modelled on New York One and just so happens to be the first all-VJ station in the UK - a pretty big deal for students wanting to know about the background of videojournalism in the UK.

Incidentally Wikis entry on videojournalism ignores this and the author must have some alliance issue because when I entered this it was deleted the following day.

Also Wiki it's instructive to note that the pioneers of videojournalism in the UK were the newspapers, Associated Newspapers, who publish the Daily Mail and Evening Standard.

That's also a big deal in the UK market, where most people I talk to imagine it was television, the BBC that started the revolution.

In fact I still have some cuttings about the whole of the industry snarling back then.

As Adrian Monck would say, you get no points in this game for coming first

On the day at Channel One we ran the report, then the Q&A which earned me a hero-gram, Nick Pollard's memo of the day saying that's exactly the approach we should be adopting.

Many years later and Channel One- a distant memory - though if you watch British news its stars are all over the screen, the twin approach has greater currency in video hyperlinking.

In this VJ film Trust in the Media - which I made while a panelist in San Antonio a couple of years back, I have embedded interviews with Dan Gilmore and others that you can call up while the feature is in full flow.

This approach I have come to think off as integrated videojournalism, which could/would sit well within a multimedia package which in itself allows for multiple narratives.

The value of multimedia packages is in delvering news in a manner which is richer by the sum of all parts (video/pics/text/motion graphics), or explains/informs of an event/affair which gives us the independence to drill.

So video journaism and its twin, Flash, are more than well suited for this.

A hanging question though?

How many journalism institutions teach Flash or what it potentially can do.

It's no longer a graphical interface tool, is it?

I'm speaking to some friends on the trade mags and hopefully should be able to produce a video feature illustrating this
Posted by Dr David Dunkley Gyimah at 7:11 am

How many journalism institutions teach Flash or what it potentially can do.

As someone myself who has tried to wrap my head around Flash off and on since version 4, I think one of the biggest obstacles is the non-intuitive workflow methodology that Flash represents. Back in the day when Adobe had Live Motion, a great program BTW, you could wrap your head around its workflow for it utilized a similar interface to After Effects - as such, the base skills translated over from each app to the other. It's a shame Adobe mothballed the program - it had great potential and would really fit in nicely with their other production apps, but alas, it's the ever frustrating Flash that they decided to go with.

As for me, I'll probably never get around to learning Flash - the time to learn how to do even rudimentary things is not time productive - at least to this Immersive Video Journalist... ;-)

Like many inventions they often find new uses beyond the imagination of the inventors e.g the telephone and gramophone to name a few.

I remember using Flash version 2/3 and it was a brave tutor who opened my eyes to it use of sequential bitmaps to mimic video.

Macromedia still consider it a designers application even with video.

But have made attempts to cosy up to non designers ie tv bods.

They probably need a VJ instructing them how to make it more user friendly.

But yes I see your point.

Only used Live Motion a couple a times.

But yes I think your cup runneth over, literally as an immersive VJ and all the potential that entails.

Looking forward to seeing more of your pieces. :)