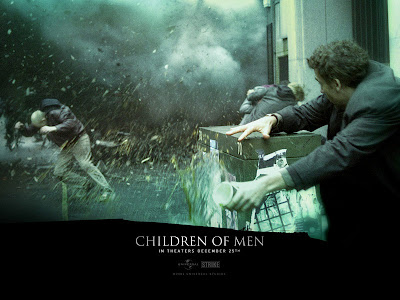 It's one of those films videojournalists should study.

Most of the revelatory stuff is on the DVD bonus where Alfonso talks passionately about his craft.

The DV cam reference is quite pivotal, as is this comment here

"Part of the reason why we chose to do Children of Men in very fluid long takes was to take advanate of the elements of real time".

Alfonso goes handheld with one take in key areas of the film. Of course a Sony Z1 is not an Arri, but still you could achieve comparable effects for online/ the small screen.

In doc formats working a room or scene without resorting to cutaways often entails a sense of knowing where the subject is.

It boils down to prepping the room or scene; one of hte 4 preps I brief VJs on.

Children of Men employs an elaborate camera and bespoke car to achieve one famous scene, where the characters have to slide in and out of the way of the cam on a robot crane.

No such worry for the VJ, but as in series like The Shield" the camera should be able to fluidly move and if you're planning to run without a min steady cam, then try the military "clear house" walk.

The film has overtones of Ridley Scott's - though yes they are very different.

Buy the DVD and also visit the site for an example of how to present a film on online using masks.

Very nice in fitting with the film
Posted by Dr David Dunkley Gyimah at 7:52 pm