Reading could lead to jail 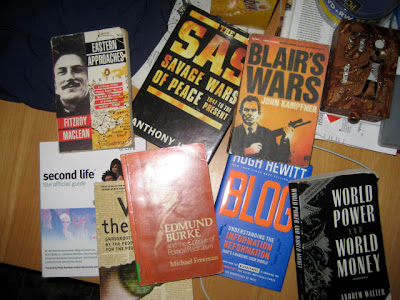 Ok the headline is a bit sensational, but this isn't a reference to the heretics or the guardians against the enlightenment period

Wired magazine reports the US is screening international travellers, particularly those pulled aside for added screening and detailing what they read.

Because of my surname - it's of Ghanaian descent by the way, not that it matters - when I fly internally there's always a tad longer exchange around American football or Dan Rathers.

If you've watched the movie se7en then you'll have seen how the FBI monitor book lists. Fact or fiction?

In any case you can see both sides of the argument. On a trip to DC interviewing the former head of the CIA, James Woolsey, I remember some small chat about profiling.

What you read, how you walk - all sorts of things play a part.

I might have to leave behind World Power and World Money by Andrew Walter when I travel- fine book I used for my LSE International Relations modules.

Meanwhile, in the UK the compulsory retention of your telephone call number comes into effect soon.

This the authorities say is to combat serious crime and anti terrorism.

Previously the act of retention was a 1992 voluntary code.

Some civil liberties believe that information in the wrong hands can expose Infidelity and Financial transaction trails.

We've been warned
Posted by Dr David Dunkley Gyimah at 11:10 am