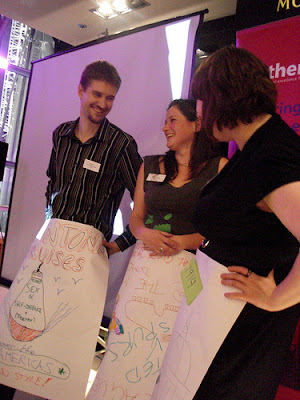 Cross post from responding to a piece on Andy's site about a late night conversation how indespensible mobile phone story telling could or might be one day.

So here goes. . . The thread for the piece can be picked up here over at Andy and the pics from the night including the one here are from his photo stream.

It certainly was some conversation. What time did we leave the drinks bar? 1.30 am?

Fi does a range of projects with the phone. Right!

But could it become a must have for journos in say the same way the A1 is fast becoming?

I don't doubt it has huge value, but perhaps like video journalism with its rocky start, we just haven't seen the trees from the wood yet.

My thoughts, trend extrapolating ( oh dear I'm off again) is that it should/might/may be beg a new visual language.

I remember talking to Clyde Bentley, Associate Professor of Journalism at Missouri School of Journalism who told me some years back now that Mobile programme use in S. Korea is huge.

In visual narrative, I guess it's more of the FBCU's than the CU, given the screen size.

And while it may be great for Citizen jo and "open wide" shooting, what about the construct?

One major K.app I said to Fee would be when the handset either by max-fi/wifi or some device lets you broadcast straight into a TV show/site or say with millicent.tv you stream live with multiple cams.

Voila a minature sat kit on the cheap.

Or what about having the lens on a rotating gimble or attached to key hole camera so you can do clandestine stuff?

My A1 despite its size would have been too intrusive.

Fees in Leeds on Monday. She might be able to enlighten us further.
Posted by Dr David Dunkley Gyimah at 5:06 pm

Not sure if you have read this see below I saw this via an e-mail from creativematch.

Mobile and web video news journalism on Channel 4, they also use Millicent as described in your blog posting.

C4’s Dispatches heralds the release of this new tool for broadcasters, brands and bloggers, who want to harness the power of video distribution – on TV, the web or mobile phones – without the inherent costs associated with the traditional live TV production model.

Millicent can source content from hard disks, the web or mobile devices and transform them into a broadcast quality TV stream simply and cost-effectively. Millicent aims to transform the way content is produced – and by whom – for video distribution.
See link for more info

Hi David regarding mobile phone production, have you seen the work of Max Schleser, whose PhD is in Mobile video production for film creation and storytelling.

Check his profile
here . He involved in very interesting project called FILMOBILE, which aims to create a dialogue between the industry, filmmakers and artists working with mobile devices through a variety of on and off line events.


Max Schleser will be organising the international FILMOBILE conference and exhibition, which is scheduled to take place in London in April 2008.

Max also attended the 0-1 event titled the "The revolution will not be televised . It will be YouTubed instead back in March.