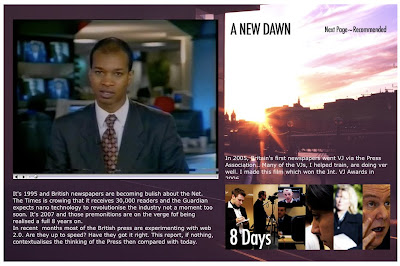 Sundays will never be the same again....

The last time I said that in that very same way was... er 1995 presenting a broadcast package from a colleague Mark Vjying about this thing called the Internet.

The papers had just got hold. It's definitely worth a look: What the papers says, just to give some contemporary historical to where we are now.

Among the pundits, The Guardian's Bill Thompson, now a lecturer at City University and pundit appearing on BBC pages talking about the future of newspapers.

Sundays have transformed from a desk strewn with various Sunday papers to a permanent glow of light and rattle of keys from my mac.

Today I detoured to Search Engine News - an online publication that I used to subscribe to, which this month is giving free access to its stray clients.

Everything you wanted to know about SEO and link building and the rest. e.g claiming your Namyz, Yahoo's Web Analytics -in answer to google- and managing your search engine reputation.

It's conceivable, quite conceivable that at some point we'll cross some digital Rubicon, in which the quality of your article, its witticism, erudition, quality of prose will be usurped by bots determining inbound links, viewer popularity and how many social sites feed it juice.

Darwinian Futures
In Darwin amongst the Machines, a passage reads:

Three centuries after Hobbes [a philosopher] automatia are multiplying with an agility that no vision formed in the 17th century could have foretold. Artificial intelligence flickers on he desktop and artificial life has become a respectable pursuit.

Not an endorsement for androids over humans, but worth a read.

So to round of the week, what organisation or individual this week did not submit to the Knight News Challenge.

Dan Gillmor twitters on the site: "We've had a huge response this year, please be patient"

Yes I too fell for the long odds and will post my scribbles here this week, a sort of ethnographic study of inter community news flows.

Do I hold out any hope? As much as having Sarah Palin become UN Secretary General.

I wonder what the odds would be for submitting a, " I want to set up regional video journalism in every neighbourhood?".

Sorry! BBC's already looking to do something in that guise.

So then to the biggest story this week: the US election. And on the front page of viewmagazine, I asked a question partly prompted by watching BBC news analysis show Newsnight.

Is this election [US] the most important one globally in years? What about those of Roosevel's ,Reagan or even this 1994 South Africa's first all race election, which I have posted the audio on viewmagazine.tv.

A day before the election which would signify the legal abolishing of racial segregation [ Apartheid] right wing forces detonate a bomb in down town Joberg.