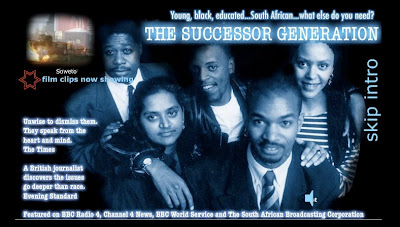 Joy Hatwood, a multiple Sony award winning producer; think the Emmy's for Radio in the UK, was leaving the BBC after so many years.

In her box she carried personal items and the odd radio piece, memorabilia, she'd produced.

At dinner, a couple of summers ago, she pointed to a place in her living room, where her audio memories of BBC days lay.

And there nestled in between the cassettes, oh yes cassettes an 18 year old is guffawing, was First Time Voters.

Joy's ensuing words touched me: "Ordinarily when we commission we assign a researcher and a presenter.

Multiskilling in the BBC I mused - not a chance.

She continued, "but when you came with the "Successor Generation", later renamed, "First Time Voters", I said to my partner, interesting...interesting!"

We exchanged more banter before I concluded: " don't worry I'll get found out one day". Brits don't do compliments well. Humility sells rather better.

But to the idea and why I believe being a VJ in the US at this moment, this time, is a time to remember.

Blacks for the first time were being given the right to vote and it was a forgone conclusion that Nelson Rolihlahla Mandela, affectionately called Madiba, was on the crest of being the first black president.

For nine months, six months more regularly, I dipped in and out of the lives of the four people I thought would make good theatre and sent their briefs to Joy in London.

One was the country's first black stock broker, the other a feisty journalist, a comedian too who riskily could get away with poking Mandela jokes, and then there was a model, turned, conflict resoluter.

Between them they embodied and captured the spirit of South African getting ready to wake from a deep slumber.

Two young men, two young women - all from townships of sorts- now living in the city; a coloured, 2 blacks, and an Asian.

No whites? Yes no whites. This election, in this case, was about those getting the vote for the first time. Under apartheid only whites could vote.

First Time Voters played in the UK on BBC Radio 4, then the World Service, and then on the eve of SA's historic election, SA's public radio bought the rights urging each hour its audience to stay tuned.

Joy - a fantastic producer did the heavy lifting, when I arrived back in London with 60 x 1 hour tapes for what would be a 50 minute programme.

But as I begun to assemble the radio piece in Johannesburg I took pics and even recorded some footage.

Five years on
Five years later, SA's honeymoon well and truly over, I returned to SA and sought out my First Time Voters. Two new ones had joined, two old ones had moved on somewhere, but this time video journalism would tell the story from the go.

And Channel 4 News became the repository shooting on high end digibeta- a camera costing $50,000 - The Successor Generation [an edited version of this went out].

Through four people I could measure the changes, what I believed was the pulse of the country. They still paid homage to their township roots, but wrestled with ideas of being buppies ( black upwardly mobiles).

And then in 2003 before the election I paid another visit.

By now you know where I'm going with this.

Obama's victory, the new voting citizens and their aspiration allows for the sort of private long term project to tell an anthropological story that will stand the test of time.

A 7up if you know that format, when in years to come, because that's what the idea really needs like a good wine a programme will unfold that is instructive for generations.

I'm being naive really, cuz I know of a few friends already doing this. If you haven't?

This truly would be the Successor Generation.

That's what time and being a video journalist will reveal.