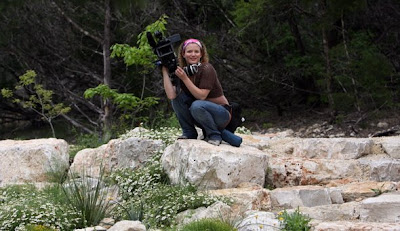 Picture by John Davenport from Angela Grant's portfolio
Coming up this week, a video interview with the amazingly talented and humble multimedia journalist, Angela Grant.

Angela's site News Videographer has become required reading for anyone practicing multimedia and video journalism. It's a people's site, with Angela moderating.

I'm a big fan and caught up with her in Chicago, when she was a training at Camp VJ.

She's self-effacing and shoots way way above the time she's spent in her job, and like the pro she is admits she's still learning.

The interview I'll post either tomorrow or Tuesday is us ( Angela, Rob Montgomery an I) talking over dinner. It's a bit noisy, but Angela's answers engage you so much, you'll soon forget about it.

I shot it on my small palm size Canon stills camera. The following day I did a more considered interview on the Sony A1, which I'll have to fish out some time.

There are a few choice moments in this interview coming up.

On two occasions Rob an I get into a spirited discussion about Angela as if she wasn't there.

David: Angela are you being magnanimous?
Rob: I don't think she's being disingenuous
David: No, no, I didn't mean that.
Rob...

Meanwhile, Angela's looking on bemused as these two idiots (us) then look at her and realise what we're doing.

I'd love that as many students watch this only because, it's incredible when you realise Angela's been a multimedia journalist for two years, yet as I put it, it seems like she's been around for ever, which starts off another amusing dialogue between Rob and I.