Corrine L. McDermid, a former Masters in Journalism student writes to me having been enveloped by tear gas at a Republican National Convention:

Please let me explain. At the University of Westminster we run a unique programme. Journalism students are airlifted into a war zone in Sweden, where Nato carries out its war games.

There students come into close contact with armed forces in evacuations, snipers at work, soldiers quelling riots and real Special Forces, who do get very aggressive. [sorry no controls on this video yet].

Nato welcomes us the first day, then tells us the gloves are off. It's a game within a game. They're not there to help you, rather treat you as real journalists after a story.

At the launch of the programme, I was the editor in the field, having reported for broadcasters in a few conflicts myself. We had about 20 different personnel; our students, others from elsewhere and some BBC reporters.

My colleague then Geoffrey Davies was running a news team back at the university putting together a half hour programme that was being beamed to the UK's highest military brass in Northholt.

The programme gives the military a chance to see what journalists, the new breed armed with tech stuff are like and it gives journalists the rare opportunity to go into a combat zone without actually getting killed.

After each day of the two week exercise we evaluate back at base where students went wrong and what they could do if they found themselves in a "hot zone".


The Pay-off for Conflict Reportage 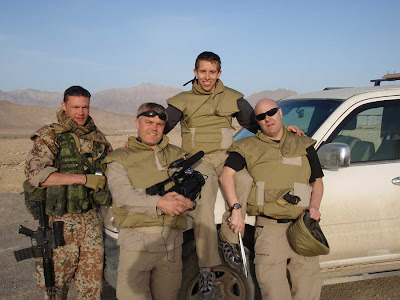 Most students who've made the programme have gone onto the types of jobs, newly qualified and seasoned journalists dream off.


So back to Corrine, now a senior journo with The Uptake.org. This is the video where she makes a reference to Loyal Mariner.

Still with my editor's hat on, I'd ask you to evaluate and recognise what you would have done differently?
Corrine concludes:

"We've been living the dream-- uploading strait to the internet via a 3G connection with an iPhone or a Nokia N95!"

Posted by Dr David Dunkley Gyimah at 11:47 am

Corrine's piece reminded me of Tony Birtley's piece because she was in a similar situation.

At least one but maybe multiple PTCs on the fly where she is telling viewers what's happening could help.

I realize there are shots of her but we never have a clean look at her the way we see Birtley in his piece. He is telling us what is happening.

And I realize that there is narration in Corrine's piece, but visually she needs to establish her presence as the storyteller on the scene.

Who are these protesters? We don't get any comment from them which would help this story.

Finally, the Birtley piece uses some higher angles or safer shots far away from the action.

I saw one shot in Corrine's piece from a higher angle but a few more of these would help.

Birtley used some of the safe footage to refute what Myanmar's foreign minister told the U.N. Security Council.

Nice piece though. I've covered situations like this in my career as a still photojournalist and I remember how hard it is.

Net is slow right now and Filckr is not loading so I'll post a supporting picture soon.