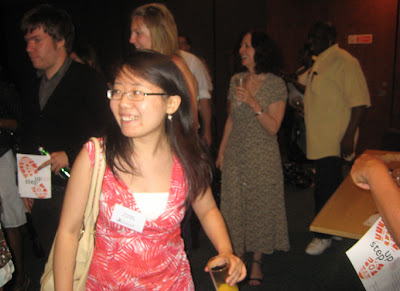 Eager, if not a little unsteady. Willing, if at times somewhat confused.

If it wasn't the bullet-speed variable accented English she had to get used to, it would have been the weather - muggy, grey and oh so uninspiring.

But Yixiang, proud to be in the UK, fulfilling the wishes she harboured for so long, soldiered on.

Yixiang, slight, with an infectious laugh, at first by default, went about things the not-so-easy-way.

I once invaded her privacy enquiring about the province she grew up in China and whether her parents could afford her being in the UK. The question, I suspect at the time had the undertone of.."are you rich?"

The response was courteous and parried. She was like so many other ambitious children, whose parents could just about afford to give their daughter the dream she wanted to pursue: study in the UK.

That's one of the few times I pried into a student's life.

Emerging Yixiang
In the second semester, Yixiang lit up. She became more enquiring. The shy girl was now doing twenty questions with me ever so often.

In fact there were many times when I'd appear in the door way, spot Yixiang and then think "oh no!"

By now Yixiang would have spotted me and made light of the distance between us, with another question.

Yixiang, I just saw you thirty seconds ago with the same question, I would bemoan. We've laughed about it many times since.

Then I'd set about explaining or sending her off to the library for the specific book.

What Yixiang might have lacked in the quick grasp, she more than made up in her undiminshing zeal.

I'm certain if I'd set her a task in the freezing snow, I'd come back three days later to see her persevering to finish the job, with indentions in the snow; more questions.

Last May, she mentioned she was applying for a BBC Scheme. What would they ask? And what did she need?

I listened and it was clear as always she had the answers, but was seeking validation.

You write and I'll check, I mentioned.

I didn't have to. Armed with her blog, her videos, radio packages et al, I would learn later that she ran over her interviewers.

They asked one question and Yixiang turned into a Banshee extolling what she had done and how, and why she needed to be a BBC Intern. She got the place.

Behind Yixiang
What I haven't told you was she was the last interviewee and first saw and applied for the position with a day to spare.

Her BBC mentors spoke highly of her. At the point she was into 3 minutes of her 8 minute soliloquy, they'd decided to giver her the much coveted place.

In final projects, Yixiang, back from the BBC, would burn the candle both ends and was rewarded for it: a distinction.

She had managed to convince some of the best musicians from around the world, studying at the Royal College of Music to film them, write about them, become part of their lives.

The email traffic between herself and interviewees is the stuff of book plots. You don't get to be one of the best musicians in the world by not wanting to control your own PR.

The Now Yixiang
Today I heard back from Yixiang, doing some shifts at a local newspaper nearby, but now, now, she has secured an internship with CNN International.

Many of us teared up. Yes I did as well. Brilliant!

That little shy girl has transformed and continues to do so.

Her willingness to learn and general outlook is intoxicating, and if she will afford me this indulgence, it's something I kicked myself about, attempting to study for my degree having spent many years in Ghana.

And perhaps like Yixiang not quite understanding the environment around me.

So please raise a glass, water-filled even, for Yixiang, and for the triumph of perseverance, the right attitude and that age old mantra - if you want help, you must try and help yourself first.

Last week I received an anonymous email. As I recall that moment I'm smiling now. It was from the RTS, the Royal Television Society, an august body, requesting whether I would be interested in being one of the jury members at the 2009 awards.

I smiled because in my heart I believe in years to come one Yixiang will be emailing me to say she's been invited to judge the extraordinary work of others.

In my heart, there are many Yixiangs, but only one Yixiang and she is testimony that dreams do come true.

I pray and hope her new custodians, CNN, take good care of her.
Posted by Dr David Dunkley Gyimah at 2:23 pm