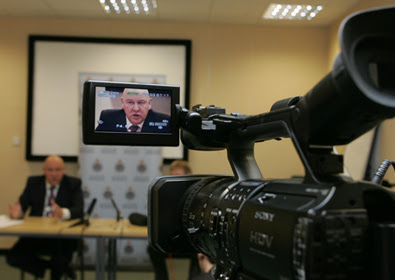 http://www.viewmagazine.tv/videojournalism_conf.html: what is video journalism?


Video journalism is the Bauhaus of television's news' pictures - a shift away from the staid 3:6:9 approach television has stuck to doggedly.

At its best use it usurps the ideal of standardised pictures, discarding order and predictability instead for self expressionism and a leaning towards auterism.

As a movement the form merges a graphical and photo journalistic stanza; a poster cover depiction of the moving image, where each shot matters, each shot counts.

If Capa lived to capture images on light- weight, hi-tech cameras, he'd be the classic video journalist and his dictum that if you're not close enough you haven't got the shot would still count.

Unlike television news, VJism mimics the language of film making [cine-vjism], itself predicated on the frame-image[ c.f storyboarding]

Vloggers, video bloggers, will undoubtedly rule the net and indeed lead the charge in video journalism: their short, sometimes idiosyncratic, deliverables well suited for a medium in which time is compressed.

It's acknowledged that video journalism has its roots in a number of early forms; the advent of film itself, yet more specifically from the likes of Slim Hewitt, a one man camera man/producer at the BBC in the 60s.

The use of video VHS, hi-8, and early digicams predates the meta-trans-digital age, which has seen video journalism come into its own, yielding divergent nascent forms.

Here, increasingly the construct of factual based features is being tested with offerings from solo VJ. Simply placing a television hit online, does not guarantee success.

The rules of contraction apply, as does manipulating the exposition in the visual essay.

Today in the new paradigm, video telling is also influenced by the paradigm and socialness of the web; the way we write, consume text, spider key words and inhabit the virtual world.

The equipment, whilst important takes ebbs in importance between primary and secondary importance. Knowing what you want without waste and eschewing churnalism is the key.

The USP is flexibility, individuality, immediacy and being light on feet.

Video journalism is not a one-size-fits-all.

NB In Nick Davies' Flat Earth Video journalism is mentioned and how it's being used in Churnalism. Practising reporters/video journalists simply don't have enough time to double up on stories leading.

This was always going to be one of the dangers of video journalism from an exec's point of view. Here, in this report, one UK regional newspaper made the decision that VJs would not write articles and VJ at the same time.