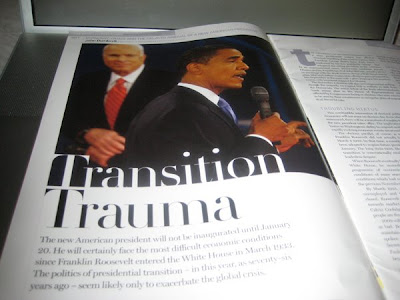 If you've been bemused by all the camaraderie, "we'll help you in the hand over" gestures from the Republicans to Obama go over to The World Today for a highly informative on Transition Trauma.

John Dumbrell, Professor of Government at Durnham University reveals what happens inside the White House, when its time for an elected president to move in, and the other to move out.

Change overs in British politics are harsh, the keys to 10 Downing Street swap hands at break neck speed, bu then the US have shown they're equal to t art of eviction.

Many PMs in the UK comment on how they go from the lush trappings of government to nothing in a split second, as a delivery van awaits to bring in the new No 10. occupant.

Here the Blairs give the cameras one last shot, whilst Cherie Blair shows her hand literally telling the press:" I don't think we'll miss you"

But at least the legacy of changing governments is a continuity provided by civil servants .

No such luck in the US where civil servants are government/ party appointees.

But where Prof Dumbrell's article really quickens the mind is how an incumbent president can make the incoming one's life difficult by leaving absolutely nothing behind: notes, tips, computer software etc.

Elsewhere on Ireports, CNN's unfiltered news, one submission, and I can't verify the veracity of the article points to the Bush administration being the first to ensure a smooth transition to an incoming president.

The article adds Clinton's team on their exit removed all the "w" from the keyboards and are alleged to have "trashed" the place.
Posted by Dr David Dunkley Gyimah at 11:55 pm