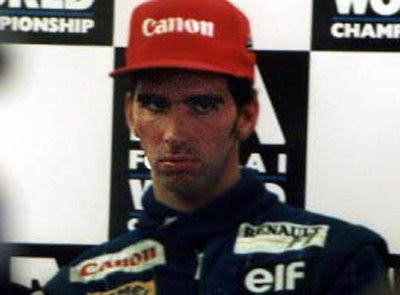 Damon Hill - the last Brit to win Formula 1 championship. That was in 1996
OMG you had to be watching F1, because it was heart in your mouth. Lewis Hamilton becomes the world Champion and the youngest ever.

The last lap was awesome. Winning and losing the title with 18 seconds to spare.

I have a few mates who will recall the fortunes of the last Brit winner, Damon Hill. For my own little story.

In 1999 working at Channel 4 News, Super Car tester Kevin Haggarthy [ here we're testing the Ferrari 599 GTB] wanted to introduce me to a young boy and his dad- a daring go kart racer.

I shopped the idea around as much as I could about the boy racer, but no TV commissioner would listen.

That young lad was Lewis Hamilton. Ah well some you win, some you lose.

Two years later, I wouldn't and in fact couldn't make the same mistake. Team Lennox Lewis asked if I'd join their camp for Lennox' fight with Tyson.

I was the only journalist let into the circle to witness and document the build up and fight up close and personal. I know that might not mean much by today's standards but at the time, and I'll talk about this is my next post it was awesome. Truly magnificent!

In terms of today's drama, the other F1s that rate up there:
Pic of Damon Hill is by Charlie Amponsah - a friend and VJ/Director , and F1 Nut, then there's Ken Walker, who's taken a fair few pics for me at Viewmagazine.tv and for a period in his life followed the F1 bandwagon around the world from race tracks in the US to Japan. What a great life!
Great stuff!
Posted by Dr David Dunkley Gyimah at 7:04 pm

AAAAGHHH! No way! Unbelievable...
And it was an incredible last lap - a rollercoaster of emotions, you might say, if you fancied a really unoriginal cliche...!