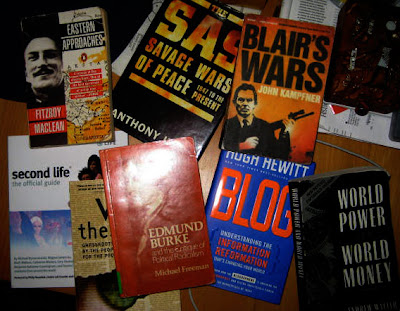 It's been an interesting few weeks.

Video Journalism matures, grows up, could be one of my headlines. I had the pleasure of meeting some regional senior UK journalists whose views I'll post soon.

Through various exchanges and findings, we discussed the merits of video journalism. I have my own views about the genre, but am always keen to find out other journalists' stance.

Next weekend I have been invited to talk to a couple of national newspapers from Russia, Czechoslovakia and South Africa. It's likely going to be Chatham House rules, but what I can share, I will.

The simple question I posit is, how do you convince consumers to watch your product?

New Story telling research
I have been loading my own research and hope to have a couple of films ready by the time I present at SXSW in Austin - a hugely popular creative affair.

In fact, in conjunction with my research, next year looks to be an interesting year. I'd like to thank the many friends and those I don't know who have said kind things about me on Game Changers.

Often, it's just plain strange to think what we do has any value beyond the digits of our own fingers. Therefore the dialogues and exchanges I have are extremely gratifying, rewarding and mesmerizing

This morning I received an email from the UK's most respected film/TV body, the UK equivalent of the Emmy's inviting me to be one of their judges.

So once again I'm deeply humbled.

Then there's the international video journalism awards which I'm one of the jury members and am so looking forward to.


It's about doing it
Ultimately, it isn't about the stripes one picks up. It simple can't be.

The whole notion about posting into virtual space, not knowing who's reading is because we feel we might have something to say and share.

But I guess like a small stone wedged against toe and the inside of our shoe we're trying to figure out why, what and how we might make this thing work.

It's alchemy in public view. As an Applied Chemistry grad [moons ago] I can only imagine the response to being told to reveal details of all my experiments.

By design we hide those flaws. What matters is the final one amongst thousands proving our hypothesis.

You know what it's like - that long walk out of the office pondering the story and code, and then the eureka moment of running full pelt to your mac to capture that "kwaa" moment before it dissipates.

Part of the answer, a strong element of it truly lies in diversity, our differences, new theories and philosophies and how they might apply to new systems.

If there was ever a firmer reason for a broadcaster or publisher to embrace employees with a broad church of opinion, culture, background, race, it's is now.

I don't think anyone could have predicted the use of Flash when it first launched in the late 90s. Or even the less talked about Director [ now considered redundant].

The answer sometimes lies in the reapplication of historical antecedents. There we find the DNA to our New Media existence.

British Pioneers, Addison and Steele transformed such prose, which would later lead to the singular narrative voice and easily discernible texts.

Then post modernism and more acutely now, we see the delineation of multiple voices again this time being accessed through interactivity.

Arrgg History
History also tells us that disruptions and paradigm shifts are regular occurrences and that each time there is the mother of hue and cry.

The interesting bit is hearing those squarely rejecting any such changes.

And what about now?

For instance, the very prose we use now in writing is actually up for grabs.

I've no idea like the rest of us what it will be , but if we seek to get our message across more effectively we have to pass google's [ a new high priests] scrutiny.

A while back I carried out my own experiment. I posted an article into an index which google returned almost 3 million listings.

Within 4 weeks the article climbed to number 5 and as it now ebbs between 1 and 3.

Did I necessarily have had to be a 'good' writer to get there?

My point, to make headway are we writing for robots first and humans second?

This is an important question because it impacts on the human quality of our writing.

To appeal to a burgeoning net-televisual audience does the existing exposition for TV news story telling work?

Will websites at some point come to play multiple roles, even a televisual one going beyond online incarnations to habiting other platforms, thus crystallising thebrand? Have you noticed how many news sites have come to ape the 'rich film sites'.

How soon before we'll be video hyperlinking each other?

How soon before protectionism from ISPs appears on the web wall-gardening our browsing habits?

And just when will we accept that video journalism exists in multiple genres?

The answers aren't so far off.
Posted by Dr David Dunkley Gyimah at 9:14 pm