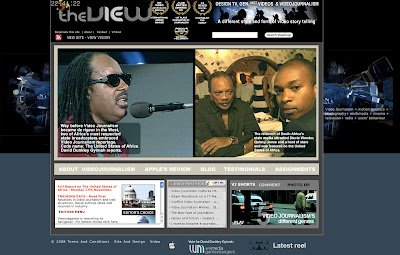 Front page of Viewmagazine.tv
Way before videojournalism became de rigeur in the West, two African broadcasters mashed up to create their first ever co-production using videojournalism as their production base.

The deal was brokered then by one of CNN International's shinning lights, Edward Boateng.

He called me up with what could only be one of the most ambitious plans i have ever encoutered to date.

On Monday 17th November I'll bring you the story with video from that amazing shoot in including archive given to us at the time showing Stevie Wonder performing for Nelson Mandela and hopefully my interview with Quincy Jones.

The name of the show: The United States of Africa. One of the follow ups of that was an interview with Dirk Coetzee, which also became the subject of a double page newspaper spread article. See you then
Posted by Dr David Dunkley Gyimah at 10:49 pm