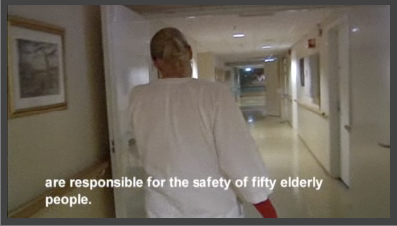 His film "The Nightwatch" a touching story of two nurses dealing with life and death as they work the night shift at a home for the elderly".

Idar's pedigree precedes him - a doc maker since 1997 now working for NRK in Norway who've been at the forefront of video journalism for a good while.

Igar deploys a range of techniques, but also plays with conventions.
This was my review of his film.

What I like about this film is perhaps not the obvious at first, the isolationism.

Idar's lingering shots and play on space, sound and time brings to the fore the hopelessness of a situation and those struggling to make a difference.

And whilst shooting a whole feature with two main characters in one main location could have tested the arc of film making, it's precisely this that makes the film work.

It's claustrophobic, uses muted colours and the metronome of editing is in pace with the substance of the film.

Good access into sensitive areas, for example a hospital, can often be a recipe for a strong story, but it takes a film maker empathetic with the subject and interviewees to do the rest.

Legal (release forms) aside we don't see the stricken patients and the use of wide shots apart from yielding obvious sequences illustrates a respect for their privacy.

Posted by Dr David Dunkley Gyimah at 11:21 am