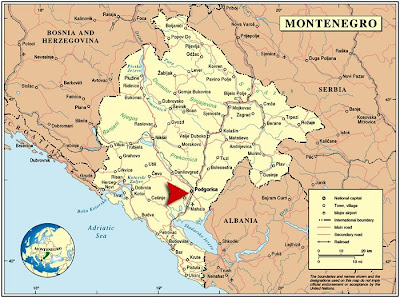 Loads to blog and talk about from this media gathering in Podgorica in Montenegro. On the map I've highlighted it with a red arrow, nestling between Albania, Serbia and Bosnia and Herzegovina.

Some amazing software development for a news CMS system within the local television station, Televizija Vijesti.

Dave Brewer, a consultant whose pedigree is just whoah.

He was one of the set up editors for BBC News Online way back when, then went on to redevelop CNNI's online news presence, then Al Jazeera. Dave talks about setting up a newsroom.

Lots of confidential candid stuff being discussed about figures, bottomlines, which Chatham House rules I won't be repeating, but it was thoroughly illuminating.

My new Russian friends, who have taken to referring to me as "David- four hands" - sounds like something out of the Sopranos have asked if I'll come out to Russia.

Tomorrow I'll bring you the cut on how you knock off a quick interview as a solo video journalist and Vin Crosbie.

My thanks to Vin and Mary, deputy head of Multimedia News at the BBC, who stood in as the interviewees.