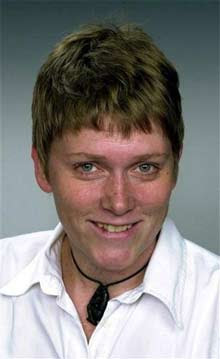 The story of Kate Peyton is tragic. Very sad indeed, both for her family and friends and for the people she worked with at the BBC.

No one who enters journalism suspects they might pay with their life.

Kate was 39 years old from Suffolk. The circumstances surrounding her death were heard at an inquest today.

The outcome, reported on BBC News, the coroner would be writing to the BBC requesting that journalists are not put under pressure to prove their loyalty to the organisation working in risky areas.

Kate, it's reported was a talented journalist and producer who had first worked in Africa in 1995 and was nearing the end of her contract.

So it would have been likely she felt she had to take the assignment, a colour piece for BBC World Service Television in Mogadishu, to demonstrate her commitment.

The Guardian reports Peyton told a friend, she was "always reluctant to go to Somalia".

The BBC it's repiorted felt the "colour piece" was important.

Kate was shot and killed a few hours arriving in Mogadishu coming out of a car.

And the de facto ambitions [ I don't mean this in a bravado way, journalists want to do their best] of journalists, and the need for media corporations to extend their coverage means there is always a risk factor.

Joburg April 1994 - a bomb blast in the capital
In this picture here on the eve of South Africa's troubles, Barry Sandland a journalist [on my right], now international web editor for MSF was recently stabbed in the chest in downtown Joburg. It just missed his heart.

Richard [ far right] who was visiting me, I'd warned to be careful as he went for a walk. He got mugged at knife point.

And I had a few scrapes myself. The shots in the towsnhips and centre of town, and completing a night time ride in the murder capital of the world Katlehong, running around Soweto, as a journalist I interviewed emptied a whole clip of bullets into a potential carjacker.

He reported himself to the police who duely told him when he enters three clips ( a clip carries 7 bullets) then he had something to worry about.

But I was young and still had my nine lives and as a freelancer wanted to impress my editors back in London.

Kate was by all measures highly experienced.

In 2003, a 24 year old video journalist Richard Wild was killed as he stood on a traffic island waiting for a taxi. As reported in the Guardian, it's unclear whether he was targeted because he was a reporter as he was not carrying a camera at the time.

Observer senior reporter Jason Burke is reported saying he'd visited a Palestinian refugee camp, and excited at filming the whole thing himself "thought it was going to be his big break".


Tough Call
It's a difficult call. At a time when jobs are scarce, many journalists will feel inclined to raise their hands to undertake the assignment many others might shy away from.

Rageh Omar, now famous, was young in his career, when he freelanced from East Africa with considerable risk. I knew him well as we criss- crossed each other in the corridors of the African service selling our reports.

In reality that assignment could make all the difference to you as a "can-do" journalist and your bosses deciding in committee, you're the right person for the job.

It may even win you an award. Mark Norman, a regional journalist from the BBC, picked up Circom's first video journalism awards for EU broadcasters with a report from Iraq.

There's no doubting Mark's talent, but cowering under a table as insurgents' bombs rained on his location, added to the drama of his award winning video.

There have been many occasions when I have advised freelancers looking for a fillip to their careers to consider reporting from remote areas, whilst at the same time strongly countering with the risks.

And in reality, the deconstruction and dismemberment of media houses means freelancing and finding pockets to report from which aren't crowded may well increase.

Safety schemes and risk assessment programmes will thus become a pre-requesite and even then one's safety can never be fully guaranteed.

Our thoughts go out to those who have been injured, fatally or otherwise for merely wanting to do their job.