The trouble with rolling news - the law of stupidity 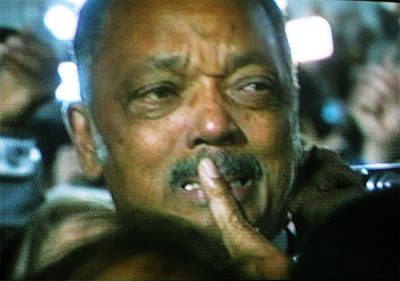 Jesse Jackson motives for crying: bitterness or joy?
Its not often I get angry.

But rolling news can do it for me. And the march of nonsensical utterings from parachute reporter pundits can be grating to say the least.

Parachute journalism, the art of dropping a reporter into a hot zone and attempting to fool viewers that the person you're listening to knows everything is both insulting and embarrassing.

The latest one I saw was from a BBC correspondent whose lack of depth was gnawing. Though she managed to speak fast enough to suggest she knew her American history from black politics.

" The weight of the whole world will be on his back and he'll develop a stoop" was how one of her deliveries maneuvered.

On Yahoo.com one poster comments on how BBC pundits witnessing Jesse Jackson crying suggested it's because Mr Jackson felt it should have been him. That may well have been and I hope therefore further qualification would have appeased someone like Kolbe who wrote:

'Yes and i was angry listening to BBC pundits saying it was because it was because he felt it should have been himself.
This man was in the real struggle that brought blacks to have a right to anything major. He was with Martin Luther King on all the marches and was right besides MLK when he was shot and killed."

There is an element of "just a minute" padding reportage. Just a minute is a BBC Radio 4 comedy show where contestants have to talk for a minute, so to pad out they turn to all sorts of gibberish.

That however is comedy.

To see professional wordsmith do it, a practice which is as outdated as it is unnecessary, is turn-for-the-remote time.

The late Charles Wheeler and a good clutch of senior journalists have warned against this. Obama's win indicates the hegemony of corporatedom, even news structures, may not be off limits. Time to seek out other news makers.
Posted by Dr David Dunkley Gyimah at 5:19 pm