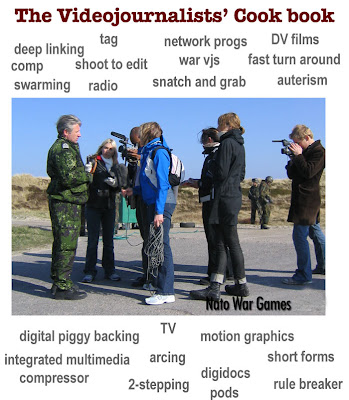 Nato War Games and in this picture, the Videojournalists' cook book emerges.

The occasion is an ENO, military parlance for an Evacuation order.

In the film preceding this photo, people are fleeing a hostile and being evacuated by choppers outside of a make-believe country.

The commander in control, refuses to give interviews until he feels everything is in order, then he's swarmed by video journalists.

Swarming
As editor in the field, I could see four obvious stories that arose from a briefing.

1. Interviews with evacuees.
2. series of package of the whole evacuation process
3. Reporting from behind safe lines
4. A one-on-one with officials.

Trouble is we only had two operational cameras, a pd150 and vx1000.

The more advanced cameras could not cope with a previous operation at sea, so with only two cameras what could we do?

Very swiftly, in shoot to edit mode the different teams gathered their reports and then handed their cameras onto another VJ.

On the awaiting evacuee ships, various teams were on stand by awaiting the choppers.

Within four hours the time it took for the complete ops, we had as many packages as our ten personnel.

The swiftness of turnaround meant on one ship, the few minutes that lapsed between an interview with a senior officer and videojournalist where he made a statement that needed correcting, was too late.

It had been sat'ed back to "mother" ie base who had it in the running order.


Tomorrow, more on the Video journalist's cookbook in conflict conditions, plus what was the news on January 1st 1996, the archive zone from the UK's first 24 hours video journalism station, a recording of transmission with now familiar faces on British TV.
Posted by Dr David Dunkley Gyimah at 9:01 am