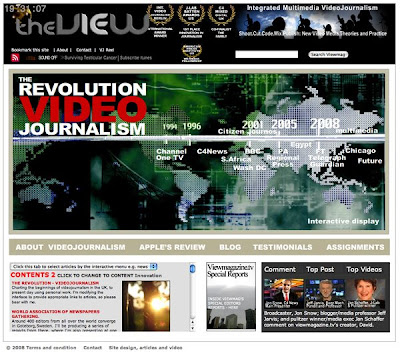 On viewmagazine.tv, with the help of Sav, a friend, I've placed a number of key videos from 1994 to present marking a personal take on video journalism.

I'll be adding some .swf files, effects and short descriptions which link to longer articles over the coming days, plus the doc on Channel One TV I mentioned in earlier posts.

The more I play with LiveStation.com, the more its appeal as one facet of future TV seems so abundantly clear.

It opens the prospect for uni-casting. ie everyone becoming a live broadcast outfit.

Also this week I'll be at the World Association of Newspaper gathering in Goteborg, from where I hope to be posting a series of reports on the newspaper industry and presenting at one of the forums on the video journalism digital newsrooms.

In a year where there's been an onslaught on the industry from many sides, what's the state of health of the industry?

Is the decline in sales, you've probably read about elsewhere symptomatic of a real trend?

Is it the overall downturn in the economy which is exacerbating the squeeze felt by the industry.

These are big questions, nay impossible to find answers to, but Goteborg should provide plenty of scope to examine the causes.

In the meantime, settling down to watch a stunning documentary: In the shadow of the moon - quite simply an outstanding film on the space race.
Posted by Dr David Dunkley Gyimah at 7:33 pm