Look mum no camera operator, David reports from the Champ Elysee, France as a video journalist 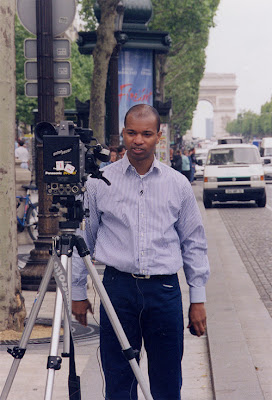 Can I migrate this stuff over to word press? Do I have the time?

Just one of those odd thoughts lingering as I put the final touches to my slide presentation to WAN, which they need in advance for printing.

If you manage a video journalism set up, this might just interest you.

I have dug out a memo from our managing director back then, Nick Pollard, who would later head up the news at sky news, and he made a huge radical change to our work flow which brought the creativity back to what we do.

Last week I had the chance to view some of the work coming out a national publication - part of research - and one of those hoary elements of reportage cropped up and just wouldn't go away.

Their reporter doing a piece on Casinos had done about 20 stand up/ piece to camera takes and still couldn't get it right.

I'm not certain which one's more painful, trying to execute a stand up with a crew, where your failures are on show, or as a video journalists, where everyone rubber necks and some hang around long enough to put you off.

This brings back memories of the image at the top.

I was reporting from France, a report for which I was selling to Channel 4 whom I freelance for.

It's about 1998, but I recall standing in the middle of the Champs Elysee doing a whole series of stand ups; not the same ones I'll add.

I'd had some good training whilst working at BBC Reportage years earlier.

The editor had coached me how I should approach the camera: tunnel vision, look straight down the lens.

As a reporter you also picked up other tips; none more useful than "keep it simple".

If you're going to do a piece to camera

tip #1 Keep it short not more than three thoughts, unless you consider yourself an actor doing lines.

tip #2 If you are going long and want large sections on camera then consider what actors and psychologists call active experiencing to get through or get yourself a cheap autocue.

tip #3 If you are doing short one use the beginning of each sentence as a marker to start you off.

tip #4 Keep it conversational - simple words - the spoken word rather than written one.

tip #5 Report for your audience rather than other reporters. Reporters tend to spend inordinate amounts of time often trying to be impressive for their showreels, which should earn them their next job.

Indeed many Vjs etc don't do stand ups at all. Hey it's a dirty game and there's nothing worse says Scott Rensberger than doing s atand up after sweating through a report.

Oddly enough many that don't do stand ups remark that's sooo television forgetting that when you remove the postering, side on stance and the steely smirk, a stand up/piece to camera serves many functions.

It brands you, says you were there and can often be used as a bridge when there's a dearth of video to fill in, as in court reports.

In the ever increasingly busy broadband world of narrow casting, the stand up/ vlog/ piece to camera will never be as invaluable as now.

Of course back in the days, using beta cameras we had to perfect the task of focusing on say a piece of chewing gum on the floor and then estimating our height before pressing record and standing in front of the camera - on your own.
Posted by Dr David Dunkley Gyimah at 10:02 pm