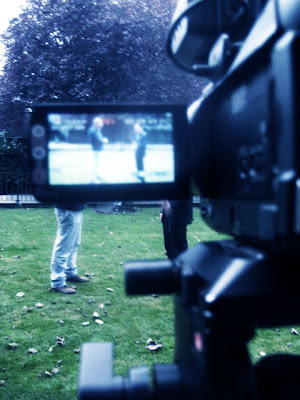 It was a sure fire way to get laughs.

What are you?, the production manager would ask.

Of course you might just as well have walked the corridor with toilet paper trailing you.

So you never said that.

This was the BBC of the mid 90s, when until then radio people did radio, and TV people thumbed their nose at them radio lot.

Never the twain did they meet.

Often the term of reference used for someone who'd moved from radio to TV, was that they had graduated.

Yes, there were many who walked the line between radio and TV, even before this watershed of the 90s during the era of Director General John Birt and job swap.

One of them whom I stood in awe of was Jerry Timmins, who now effectively runs the BBC World Service.

He'd report, produce on Newsnight circa 1990, I was a researcher then, and then go do radio.

Ahah so it was possible then.

So early in my career I had a break.

BBC GLR, the BBC's London Station gave me a co-presenter/producer position for a wednesday community show, whilst tuesdays and thursdays I researched on BBC Newsnight.

Of course this was never going to last. It didn't.

But radio offered you a chalice without all the gold plate. You just picked up your Uher, Marantz or Sony recorder, found a story and then rang an outlet and made your case.

So in 1992 after various jobs at BBC radio and TV and the domestic job market drying up, I rolled a dice.

South Africa it was then.

South Africa during that era was incredible and there's lots I can recount, but one of the things I'm most drawn to, which gets me going, is a 40 min radio doc made with an award winning radio 4 producer Joy Hatwood.

It was called First Time Voters and for six months gave me the opportunity to follow 4 talented South Africans voting in their first election.

And yesterday I found the doc.

It's so distant a memory to imagine a country where laws governed the movement and lifestyle of blacks.

On the cusp of change, this doc provides a sample of the anxieties.

I was fed up, fed up of always hearing a group being spoken for, of the mass appeal slant being pursued.

This is young people talking way above their age.

And here it is.

First Time Voters (the pic and Flash multimedia project here) would later air on the BBC World Service and with one day before their historic election the South Africa Broadcasting Corporation.

But really that's not what this post is about.

In the digital age of media, it's all ones and zeros really.

No one's laughing at you now are they?
Posted by Dr David Dunkley Gyimah at 12:04 am