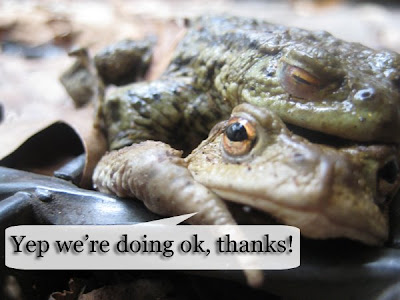 Is there a reason behind this or are you just pleased to see me. Picture taken by David walking in the woods

Digital piggy backing or should that be frogging involves using the slip stream of, say, a broadcaster to make your own show.

I'll talk more about this later in the week, but today featured in this month's .Net and it appears busily doing the rounds, is a clever, albeit agent provocateur Matt Hanson, behind the book Pirate's Dilemma.

I haven't read it fully yet, but the interview in the mag, coupled with this Q and A below tee up his underlying theory.

"Pirates rule the world and if you want to stay in business or make headway, best to know what they know".

It's a business practice which plays off so many others, but in times like these could do with a face job or for that matter reworking the story, which Matt seems to have done.

Pirates, here, could be anyone of the disruptive cultures e.g. youth and illegal downloads, who'll tear down your business model before you can say "call the damn lawyers".

The theme has some DNA strands from The Innovations Dilemma, which in turn derives some mitochondria from the 60s model Prisoner's dilemma.

This last theory, with variations, calls into question collaborative behaviour and is worth a play with a colleague.

"You get caught with some acquaintance, you barely know, doing something unlawful and get hauled into the police cells. They're fishing for clues and offer you a deal.

If you cough up the truth and your so called friend doesn't you go home. She gets 3 years.

If you both stay silent you'll do 3 months.

If you both fess up, well that's bad, a year.

Standard practice seems to be, save your skin, until you realise that you've both testified and will now be eating porridge for a year.

And the purpose of these business revelations, a sort of Art of War in the competitive world of entrepreneurship and how to smack-down the supposedly "know-it-alls".